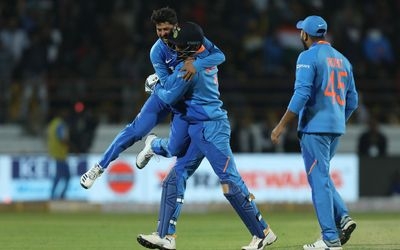 Kuldeep, 25, claimed the wicket of Australia's wicketkeeper-batsman Alex Carey as his 100th scalp in the 38th over, three balls later the chinaman bowled Steve Smith on 98. It turned out to be the crucial wicket for India as it turned the match on its head.

In 58 matches, Yadav became the third-fastest Indian bowler to reach this feat after Mohammed Shami (56) and Jasprit Bumrah (57). However, Kuldeep became the fastest Indian spinner to pick hundred ODI wickets surpassing Harbhajan Singh, who achieved this milestone in 76 matches.

Along with Yadav, Captain Virat Kohli also broke another record. He went ahead of Rahul Dravid's tally of 124 catches. He took a comfortable catch of Carey at extra cover to go ahead of Dravid's score.

India won the second ODI by 36 runs and level the three-match ODI series 1-1. The series decider will be played on January 19.