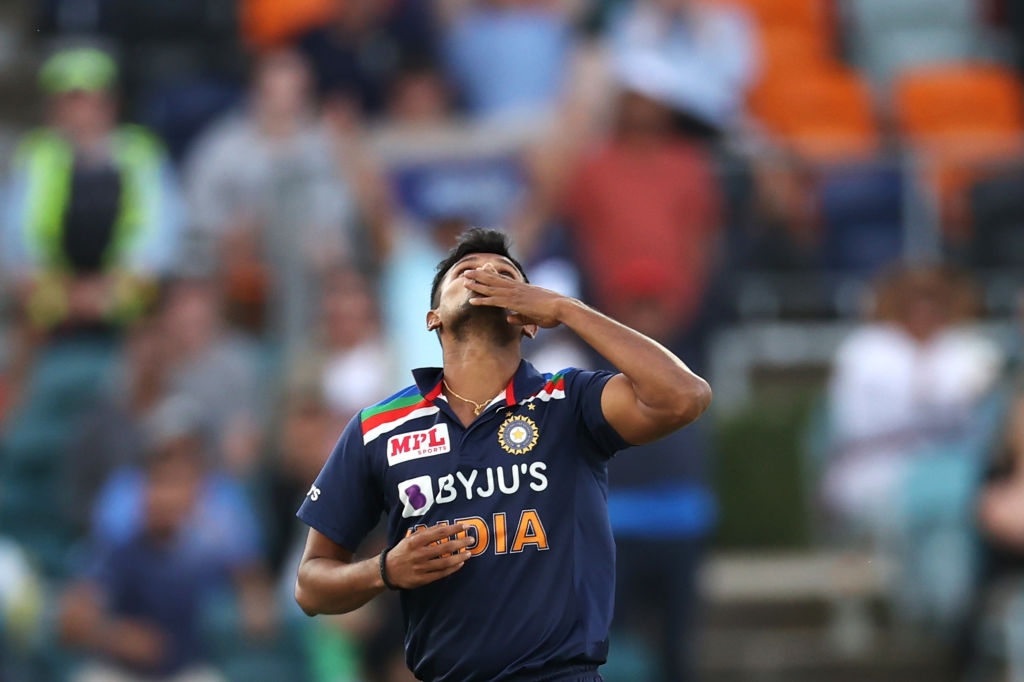 After impressing in his ODI debut against Austrlia, India pacer T Natarajan marked his T20I debut in the opening game of the three-match T20I series against Australia on Friday at the Manuka Oval in Canberra.

Before the toss, the Board of Control for Cricket in India (BCCI) tweeted a video in which Natarajan received his cap from Jasprit Bumrah.

"Onwards and upwards! After his ODI debut, @Natarajan_91 will today play his maiden T20I game for TeamIndia. He gets his cap from @Jaspritbumrah93 #AUSvIND," BCCI tweeted.

During the toss, skipper Virat Kohli said: "Great chance to have a look at a few guys. Have managed workloads of the bowlers nicely so far. We've been playing good T20 cricket, we just have to continue that. Natarajan is making his debut today. Looked composed in the third ODI. There was a reason I went to him."

Earlier on Thursday, Natarajan had said it was a 'surreal experience to represent the country' after making his ODI debut on Wednesday.

"It was a surreal experience to represent the country. Thanks to everyone for your wishes. Looking forward for more challenges," Natarajan had tweeted.

The speedster from Tamil Nadu gained popularity from the latest edition of Indian Premier League (IPL) where he was labelled as the 'yorker machine'. Natarajan played for Kings XI Punjab and bagged 16 wickets in as many games in the 13th edition of the cash-rich league.

His performance in the IPL handed him an India call-up. He was first included in the shortest format squad and later on added as back-up in the ODI side by the BCCI. This decision was taken as pacer Navdeep Saini complained of back spasm.

In his ODI debut game, he returned with figures of 2-70 in his ten overs including a maiden. He bagged two crucial wickets of Marcus Labuschagne and Ashton Agar and derailed Australia's run-chase as India claimed a 13-run win.

The Australian team, meanwhile, is wearing an indigenous jersey to pay tribute to country's indigenous people. The jersey has been designed by Kirrae Whurrong woman Aunty Fiona Clarke, great great-grand daughter of Grongarrong (Mosquito), who was one of the members of the team that played in England in 1868, designed the original Walkabout Wickets artwork that will feature on the front of the playing shirt.

It has been co-designed by Courtney Hagen, Butchulla and Gubbi Gubbi woman, and Cricket Australia's Indigenous Engagement Specialist.

"It's a phenomenal design, grateful to be able to wear it (the indigenous kit)," the Australian captain said while talking about the kit.