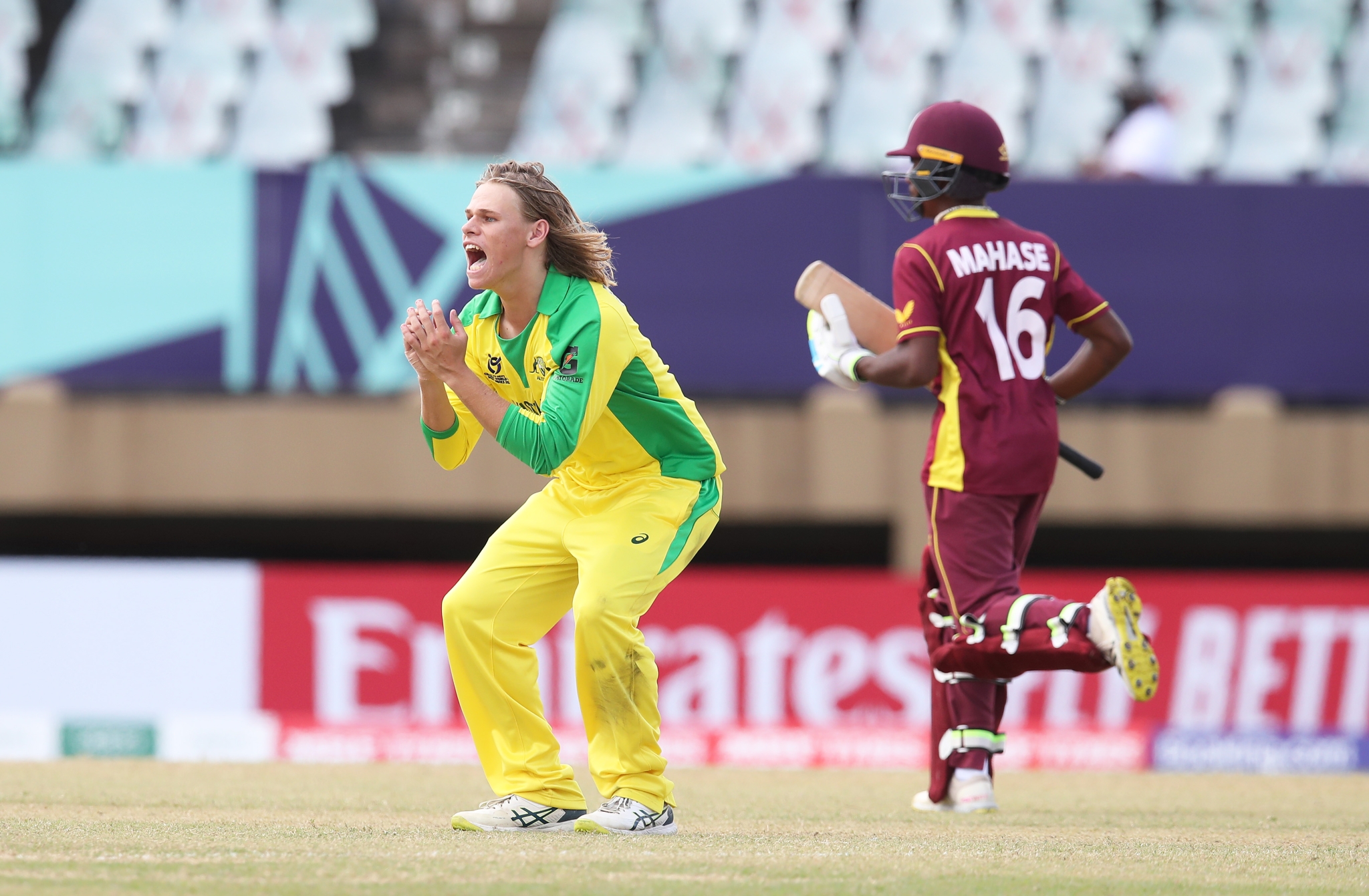 Action from the match between Australia and West Indies | Photo: Twitter/ICC

Australia delivered a dominant early statement of intent as the hotly-anticipated ICC Under 19 men's World Cup kicked off on Friday.

The three-time champions breezed past West Indies by six wickets to get their tournament off to a flyer and inflict an early blow on the hosts in Guyana.

Cooper Connolly's side required just 40.1 overs to take all ten West Indian wickets and spearheaded by opener Teague Wyllie, chased down their target of 170 to win with ease.

And in the other game on the opening day of the ICC U19 Men's CWC, it was Sri Lanka who got off to a winning start as they toppled Scotland by 40 runs.

Dunith Wellalage's side posted a competitive first-innings total of 218 before economical middle over spells from their versatile attack - including five wickets for captain Wellalage - skittled the Scots for just 178 inside 49 overs.

Wonderful Wyllie fired Australia over the line West Indies were punished for a below-par batting performance as Australia cruised to a comfortable triumph at Providence.

After Ackeem Auguste's side had been bowled out for just 169 - with almost ten full overs to spare - Wyllie's polished 86 not out helped Australia complete the most impressive display of the day and win within 45 overs.

Australia's seamers had caused havoc with the new ball as opening bowlers Tom Whitney - three for 20 - and William Salzmann - one for 19 - reduced the hosts to 12 for three after 5.1 overs.

Skipper Auguste's defiant 57, bolstered by wicket-keeper Rivaldo Clarke's 37, propelled them to a fourth-wicket partnership of 95 but wickets at regular intervals after Clarke's dismissal proved the West Indians' downfall.

Australian captain Connolly and off-spinner Nivethan Radhakrishna took three wickets apiece as West Indies, winners of the ICC U19 Men's CWC in 2016, were unable to muster a match-winning total.

Wellalage inspired Sri Lanka to hard-fought victory. Sri Lanka executed a skillful defence of their total as captain fantastic Wellalage and his bowlers fired them to victory in Georgetown.

Wellalage's canny left-arm spin saw him rack up formidable figures of five for 27 from nine overs as Scotland were unable to ever get going in pursuit of their 219 target.

Sakuna Nidarshana Liyanage was the hero with the bat for the Sri Lankans, striking a majestic run-a-ball 85 to haul his side up to a total that left the game intriguingly poised at the halfway mark.

Raveen de Silva (30) delivered some important runs from the tail while contributions from top-order batters Chamindu Wickramasinghe (28) and Sadisha Rajapaksa (24) left Charlie Peet's Scots with considerable work to do.

Sean Fischer-Keogh (3-56), Jack Jarvis and Oliver Davidson - two wickets apiece - starred with the ball but underdogs Scotland were unable to mount a viable attempt with the bat as Sri Lanka's spinners turned the screw.

Only middle-order batter Jarvis, who notched 55 off 61 balls after arriving at the crease with scoreboard pressure intensifying, scored over 20 for Scotland after the top four failed to fire in the face of some accurate Sri Lankan bowling.

A flurry of late wickets saw Scotland eventually dismissed with eight balls of the innings remaining, 40 runs short of Sri Lanka who will look to build valuable momentum ahead of their mouth-watering Monday meeting with fellow Friday winners Australia.