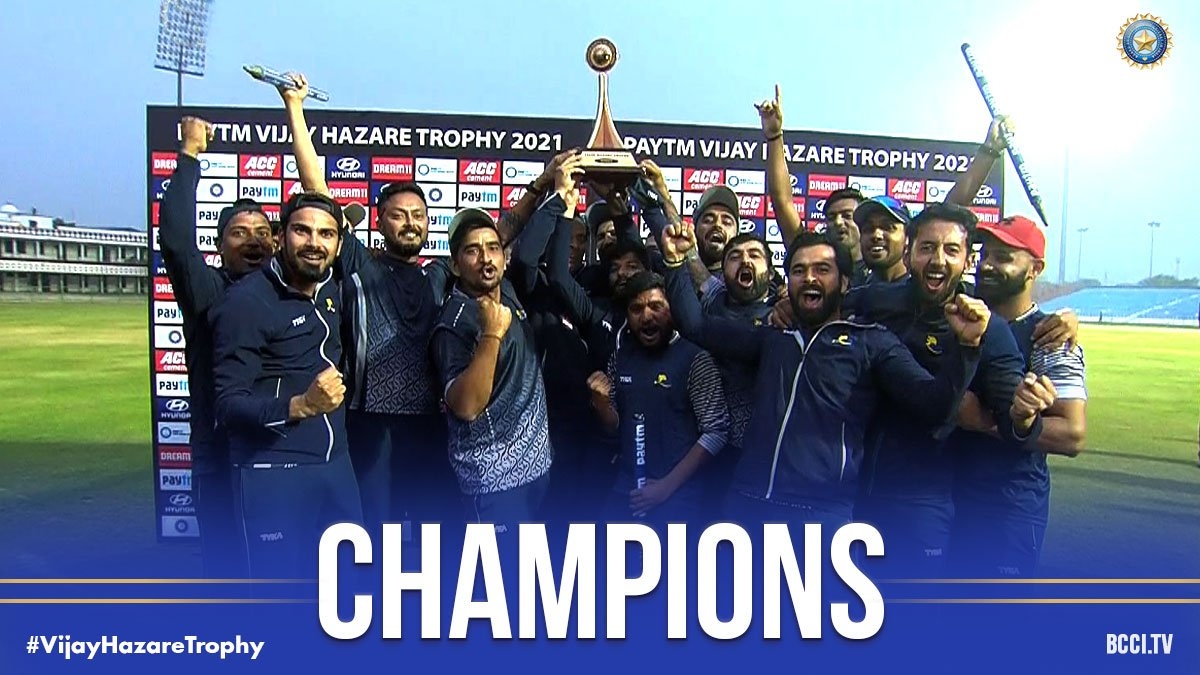 Himachal Pradesh after their win in the Vijay Hazare Trophy. | Photo: BCCI/Twitter

Former India coach Ravi Shastri on Sunday heaped praise on Himachal Pradesh after they won their maiden Vijay Hazare Trophy, saying "it is one of the great inspirational stories".

"...You know for a team like Himachal, like I said no superstars, but going on to win the tournament, just goes to show that if your work ethics are good, you are grounded, you are humble and you want to play the game in the true spirit of the game as a team, you can achieve great heights.

"So, hats off to them for pulling off one major upset after another in this tournament," Shastri said.

The former India all-rounder was speaking after the prize distribution of 74th Police Shield tournament at the picturesque Mumbai Police Gymkhana here.

Himachal Pradesh on Sunday stunned the mighty Tamil Nadu in the final of the Vijay Hazare Trophy.

India player Suryakumar Yadav, part of the winning Parsee Gymkhana team, slammed 249 in the final of the Police Shield and played a key part in the team's victory.

According to 59-year-old Shastri, the knock played by Surya will help him in bigger tournaments.

"I think the best thing what (that) I liked was to see senior players from Mumbai coming and playing this tournament (Police Shield).

"Someone like Suryakumar Yadav, who is with Indian team now, with the Mumbai team, a senior player but when you have such players, coming and playing these tournaments, it only gives confidence to the other players in that dressing room to emulate him and reach to heights he has achieved," added Shastri, himself a former Mumbai captain.

Shastri, who has served Indian cricket in various capacities, also spoke about the dismal performance of the Mumbai team.

".when I see sometimes score sheets that show Pondicherry beating Mumbai, twice, not that they are an ordinary team, any team can beat any team on a day, but it tells you that there is a problem somewhere," said Shastri.

"When you see a team like Himachal cruising through to the final, without any big names, and Mumbai not getting through and it has been for sometime now, then you start asking questions.

"And first and foremost, I would say (is that) I get the feeling a lot of people who play for Mumbai these days, take things for granted.

"They think you have a Mumbai stamp then we will win, this doesn't happen. You have to go and respect the game, respect the work ethics, respect where you have come from and then go out and play as a team that is the Mumbai cricket team with pride," Shastri added.