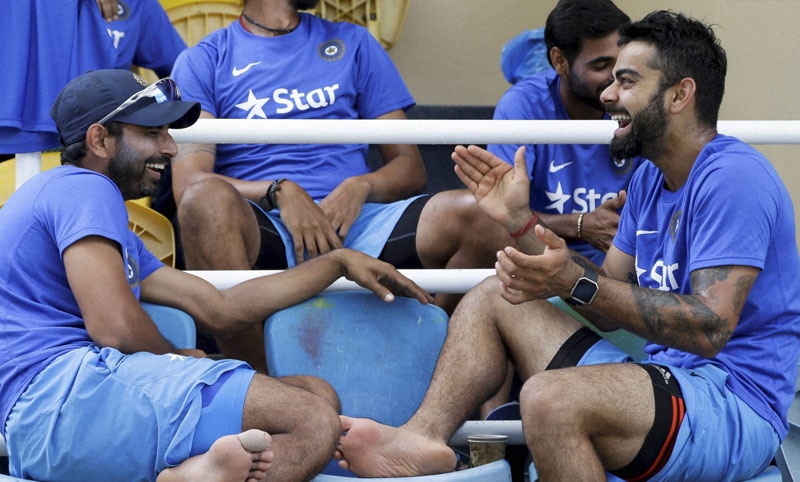 India captain Virat Kohli turns 33 today. He has played 443 internationals and scored over 20,000 runs across formats. Kohli is known to be an expressive player and the cameras panning to him when he is on the field is a common sight.

While we have picked some of his top knocks at the highest level, here are some of the not-so-cricketing moments that he has had on the field.

War of words with Johnson: Kohli didn’t have a great tour of England in 2014. As a result, he was doubly charged in the subsequent tour of Australia, where he eventually scored four hundreds. In the third Test at the Melbourne Cricket Ground, Kohli struck a masterly 169. However, the innings had its own share of Kohli moments. Johnson was sledging the Indian batter, who didn’t shy away from giving it back. During one such moment, Johnson threw the ball at Kohli, in a bid to hit the stumps, leaving the young Indian batter unimpressed. Even though Kohli scored a massive hundred, it was Johnson who dismissed him at the end.

The Kohli-Paine talk show: Temperatures are always high when Australia play in their backyard, and a bit of Kohli presence is like adding oil to fire. In 2018-19, when India beat Australia Down Under for the first time, Kohli had his share of non-cricketing moment. He was constantly at the Aussies and, with Australia captain Tim Paine walking in to bat at a precarious situation, quipped, “If he messes it up, it’s 2-0. Who’s gonna talk then?”

Middle finger episode: The Australian crowd is not known to be the friendliest when it comes to the opposition players. In his maiden tour of Australia in 2012, Kohli was fielding at the boundary. The crowd at the Sydney Cricket Ground got chatty and next thing, Kohli was seen flashing his middle finger. In an interview with Wisden Cricket Monthly, Kohli did pick it as a moment he’d like to forget.

i agree cricketers dont have to retaliate. what when the crowd says the worst things about your mother and sister. the worst ive heard

Effing backyard jibe: James Anderson vs Kohli became a battle to look forward to since the Indian’s poor show in England in 2014. In the latest tour earlier this year, both Anderson and Kohli were having a go at each other – both with bat & ball and the mouth – in the Lord’s Test match, when Kohli was heard telling Anderson on the stump mic, “You swearing at me again, are you? This isn’t your f***ing backyard!”

Brain-fade incident: In the Bengaluru Test of 2017 between India and Australia, Steve Smith was spotted looking at the dressing room before deciding to take the review. Kohli spotted this and had a chat with Smith, who was then told to walk off by the umpires. Even in the press conference, Kohli minced no words, “The umpires knew exactly what was going on. They’ve been doing that for the last three days and it has to stop. There are lines you don’t cross on the cricket field.”

Gambhir vs Kohli: In the 2013 IPL, in the KKR vs RCB clash, both captains – Gautam Gambhir and Kohli respectively – had a heated moment. After Kohli’s dismissal, Gambhir was seen saying something to Kohli, which the latter didn’t take kindly to. They almost came to blows, before being separated by the players.