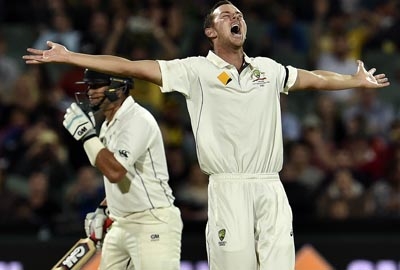 Australia men’s pacer Josh Hazlewood turns 31 today. The tall fast bowler has played 56 Tests and ODIs each and 24 T20Is, including the Men’s T20 World Cup 2021. Hazlewood has 340 wickets in international cricket and has played in the IPL for Chennai Super Kings.

Among Hazlewood’s 215 Test wickets, 32 have come in day/night Tests in just seven matches. On his birthday, FPJ looks at some of his memorable spells with the pink ball.

5/8 vs IND, 2020: In what was a thrilling spell of fast bowling, Hazlewood single-handedly decimated India in the day/night Test in Adelaide in 2020. India had taken a lead of 53 in the first innings after bowling Australia out for 191. However, Hazlewood picked his five wickets in just 25 balls, the second-quickest time in Tests, to bowl India out for a mere 36, their lowest in the format.

6/70 vs NZ, 2015: In the first-ever day/night Test, Hazlewood made his presence felt. Australia managed to take a slender first-innings lead, post which, the lanky pacer got into the act. He picked up six wickets for just 70 runs, to dismiss New Zealand for just 208.

3/63 vs PAK, 2019: It was a different role for Hazlewood in this match, again in the second innings. He played a perfect support role to Nathan Lyon who picked his maiden fifer against Pakistan in Tests. Hazlewood dismissed Imam-ul-Haq and Babar Azam early before coming back to clean up Mohammad Rizwan, who offered resistance with 45.

4/68 vs SA, 2016: South Africa had opted to bat first after winning the toss. Hazlewood struck early twice to see the back of Hashim Amla and Jean-Paul Duminy before returning to dismiss Quinton de Kock and Vernon Philander. South Africa captain Faf du Plessis declared with the side nine down, denying Hazlewood a chance for a five-wicket haul.