Ganguly was seen posing with the match ticket and the mascots at the Eden Gardens, making it a big hit among kids ahead of the historic Test against Bangladesh.
PTI 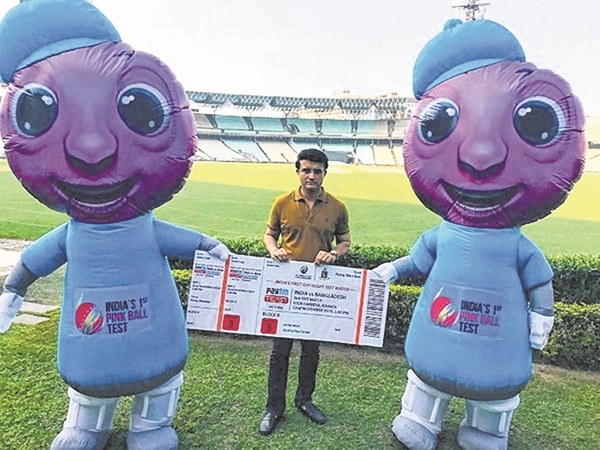 Ganguly was seen posing with the match ticket and the mascots at the Eden Gardens, making it a big hit among kids ahead of the historic Test against Bangladesh.

A giant pink balloon was also released at the Eden Gardens and it will be be seen floating in the sky till the end of the historic India-Bangladesh Test.

A ferry with pink ball illumination was also seen plying on the Hooghly and it will keep making trips between the iconic Howrah bridge and Vidyasagar Setu every evening till the match day on November 22.

The Tata Steel building will have 3D Mapping from November 20, while the Measurers' Club has already turned pink at night and others are set to do the same.

Besides this, a dozen billboards across the city, six LED boards and branded buses will also be seen from Monday onwards to further increase awareness and interest about the Test that has already got a mind boggling response, a Cricket Association of Bengal (CAB) statement said.

CAB has joined hands with Kolkata-based creative agency Creocraft to create vignettes of cricket on the inside walls of the Eden Gardens, which will say the story behind every cricketer.

Over 20 artists studying at Indian Art College are working day and night to paint this idea on the walls.