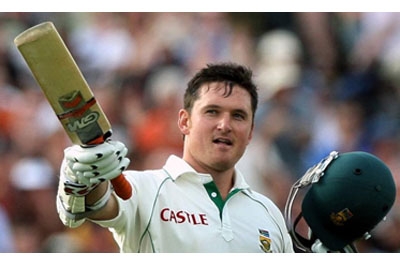 Dubai : Disappointed by South Africa’s meek surrender in the just-concluded Test series against India, retired former captain Graeme Smith said after seeing his ex-teammates struggle so much, he might consider returning to international cricket. South Africa lost the four-match rubber 0-3, two of those defeats coming inside three days. Smith, who will be seen in the Masters Champions League (MCL) for the Virgo Super Kings franchise, said seeing the decimation, coming out of retirement has become a serious thought on his mind. “Who knows the MCL could be a platform back into the international game,” Smith told ‘The National’ newspaper.

“I get asked this question a lot. It does spend time in your head, especially when you see the boys struggling in India you think you can contribute, but we’ll see. I’ll go back train, prepare and get ready for the MCL,” the 34-year-old, who retired last year, said. “For me, I’m at the cusp of whether I should play international cricket again or not,” he said. “I’m 34 now, (I) retired at 33, there’s always that question mark of whether I can play for another 3-4 years. I know I can. But, it’s just about … I’m at the cusp. I’m looking forward to the MCL and take it from there,” he added. Speaking about the debacle in India, Smith said the Proteas were probably psyched out by the tough nature of the wickets and could really not recover from that. “I think we just got a little bit in our own way in this series. When you play on tough wickets, whether it’s green, seamy wickets or spinning wickets, margins become very small and we lost out on those margins always early on in the Tests and were always playing catch-up.

“It looked like we just got in our own head a little bit in terms of the wickets. Yes they were tough, both teams had to play on the same surface,” he said. Smith said the team needs to unwind a bit now after the gruelling 72-day trip to India. “It has put us under a little bit of pressure for the end of the year. England’s a big tour back in South Africa, four Tests, so the guys need to go back home. They’ve been in India for a very long time, they need to have a bit of fun for a week, see their families, relax, catch their breath, because four Tests against England will be very exciting now,” he said. South Africa’s Test captain Hashim Amla was a massive flop in the series but Smith said the veteran should not be criticised too much. “Look I’ve got a huge amount of respect for Hashim Amla. He’s had a tough run, we’ve all had those tough runs. He’s a man of immense character and well-respected in the environment. “He needs time, it’s his first challenge as a captain now and how he bounces back from this will speak volumes for him and the team. I think we need to always give him that opportunity now to bounce back and how he brings the guys through. This England tour now becomes an important challenge for him as a leader,” Simth said.