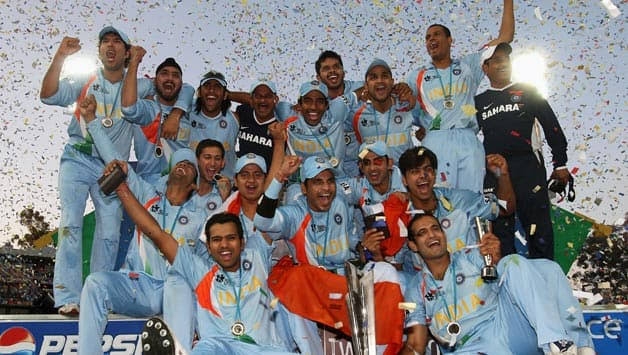 One can say the the rise of T20 cricket in India started when the men in blue defied all expectations and lifted the T20 World Cup 2007 trophy after defeating some star-studded teams.

Top stars were rested for the world cup and team India decided to name MS Dhoni as the captain of the team who eventually guided the young bunch of players to the title win.

In the tournament, there were several players who delivered a magnificent performance but their contribution was not appreciated as much as it should have. So today we have compiled a list of Top 5 unsung heroes of the 2007 World Cup who played a pivotal role in guiding the Indian team to it's maiden T20 title win.

RP was India's premier fast bowler in the World Cup. The left arm swing bowler made several batsmen dance to his tunes in the tournament. The talented pacer emerged as the second-highest wicket-taker in the entire competition, taking 12 wickets in 7 matches at an average of 12.66.

Sreesanth wasn't the most consistent of the bowlers in the World Cup but his performances in a few crucial encounters guided India out of trouble. Especially in the semi-final against Australia, when all other Indian bowlers to struggling to stem the flow of runs, Sreesanth bowled a maiden over, removed Adam Gilchrist and Matthew Hayden, and gave away just 12 runs in his quota of 4 overs in a high scoring encounter.

When Pathan burst onto the scene, he bamboozled the best of the bastmen with his swing. During the 2007 World Cup, Pathan was playing as genuine bowling all-rounder who was very effective in the middle overs and was more than handy with the bat in the lower order. Pathan's incredible figures in the finals prove why he was so important for the team. He gave away just 16 runs in his quota of 4 overs and took 3 important wickets, including the priced scalp of Shahid Afridi. Pathan was named the man of the match in the finals.

India posted 157 in the finals, and Gambhir scored 75 runs out of them. The second highest scorer in the finals for India was Rohit Sharma was scored a quickfire 30. Moreover, Gambhir was India's highest run-scorer in the World Cup for India. He scored as many as 227 runs in 6 innings and guided India out of trouble on more than one occasions.

Jogi bowled the last over of the world cup and guided India to it's first ever T20 title win. However, what many tend to forget is his overall contribution in the tournament, especially in the finals against Pakistan. In 3.3 overs, Joginder gave away just 20 runs and took two important wickets. He was undoubtedly India's second best bowler on the day behind Irfan Pathan. Jogi is currently serving as a DSP in Haryana Police.