Fortunate to have played under Dhoni: Du Plessis 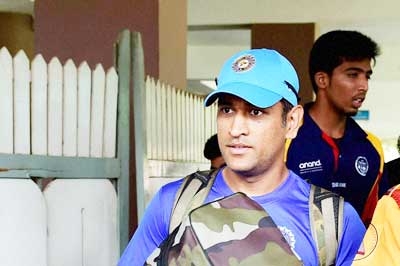 New Delhi :  Chennai Super Kings’ future in the Indian Premier League may be uncertain after a two-year suspension but South Africa’s T20 captain Faf du Plessis feels five seasons under ‘Captain Cool’ Mahendra Singh Dhoni in the IPL transformed him as a cricketer.

“I always ask him (Dhoni), how is he so cool. I can say two things about Dhoni. I have been fortunate to have played under him and I have huge amount of respect for him. Secondly I know what he brings to the table. He is a calm captain and knows how to handle pressure situations. You can learn to be your own man,” Du Plessis said.

In fact, the South African team has a ‘Mini CSK’ unit with Du Plessis himself in charge of the side.

Whether it is CSK opener Mike Hussey offering tips to the boys on how to play Ravichandran Ashwin’s ‘Carrom ball’ or former pacers Chris Morris and Albie Morkel chipping in with their inputs on what length to bowl to Suresh Raina at death overs, Du Plessis will certainly rely on the successful ‘CSK Model’ to get past Dhoni and Co.

“I can only speak from personal point of view that IPL has only helped change my game tremendously. I have learnt a lot about batting under these conditions. I have been fortunate to have a good leadership, in terms of my understanding of captaincy,” Du Plessis spoke about his time in the IPL playing for the Chennai Super Kings.

“It has helped a lot to play under Dhoni and Brendon McCullum. Personally, I learnt hell of a lot from MS. One of the reasons that South Africans are good travellers because of the likes of Chris Morris have also played IPl. We can sit back and look at those performances,” said the T20 captain.

Former Australian batsman Hussey has also been a part of the South African support staff during the ICC World Cup in Australia and New Zealand and Du Plessis feels that it will only help youngsters to learn from the dogged left-hander.