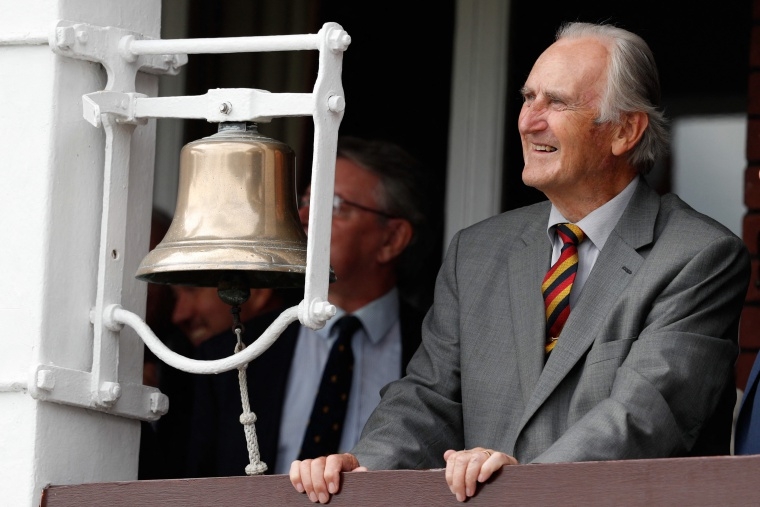 Former England international cricketer Ted Dexter rings the 5-minutes to go bell before the start of play on the second day of the second Test cricket match between England and India at Lords Cricket Ground in London. - Former England captain Ted Dexter, "one of Englands greatest ever cricketers", has died aged 86, the Marylebone Cricket Club announced on on August 26, 2021 | AFP

Former England captain Ted Dexter has died at Wolverhampton after a bout of illness, the Marylebone Cricket Club (MCC) said on Thursday.

"After a recent illness he passed away peacefully in the Compton Hospice in Wolverhampton at midday yesterday, surrounded by his family," the MCC said.

Known for his ability to dominate top-class fast bowling, he slammed nine hundreds, six of which were scores of above 140.

He was inducted into the ICC Cricket Hall of Fame earlier this year.

"Ted was a cherished husband, father and grandfather and one of England's greatest ever cricketers. He played the game with the same sense of adventure and fun that captures much of the story of his remarkable life," said the MCC, where he had served as the president.

"His off-field contribution to the game was substantial too, most notably his work, with Colin Cowdrey, on Spirit of Cricket. Through his own PR Agency, he became a pioneer in cricket's digital technology revolution." Dexter worked as a journalist and broadcaster post retirement and also served as England's chairman of selectors. He was also instrumental in devising the players' ranking system that was later adopted by the ICC and is currently known as the MRF Tyres ICC Player Rankings.

The ICC condoled the death of Dexter.

"Ted Dexter was one of the most accomplished batsmen of his era. His ability to dominate fast bowling was admirable and his superb batting against the West Indies and Australia teams is remembered by all," ICC's acting chief executive Geoff Allardice said in a statement.

"He also made notable contributions to the game in various capacities post retirement and helped develop the players' rankings that are so popular today." TagZ completes pre-Series A round of Rs 4 cr led by Venture Catalysts, Agility Ventures and Dexter...