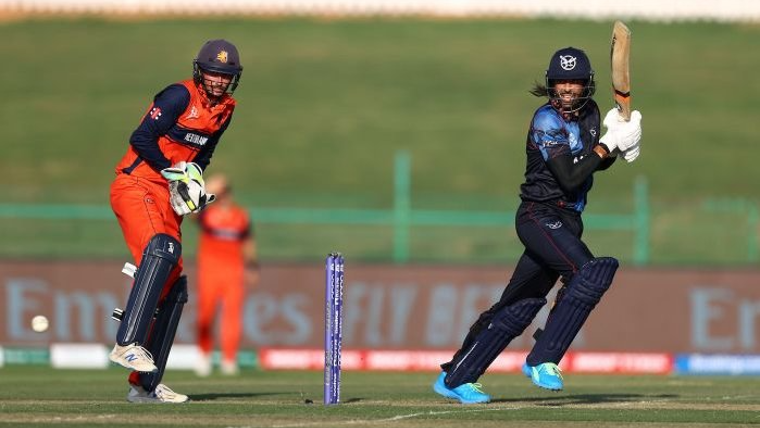 David Wiese hit a 40-ball undefeated 66 as Namibia registered their first win in T20 World Cups beating Netherlands by six wickets in Abu Dhabi on Wednesday. The result also meant that Group A was wide open with three of the four teams having won at least one match. The Dutch have lost both their fixtures so far.

Chasing 165, Namibia got off to a steady start as openers Zane Green and Stephan Baard put on 34 runs for the first wicket but this stand was cut short in the fifth over as Fred Klaassen got the better of Green (15). Craig Williams (11) failed to stay at the crease for a long time, and Namibia was reduced to 47/2, still needing 118 runs to win from 77 balls.

Stephen Baard (19) was then bowled by Pieter Seelaar, enabling the Netherlands to gain an upper hand in the match. However, David Wiese next came out to bat and he started teeing off, and his quickfire sixes kept Namibia in the hunt of chasing down 165. Wiese and Erasmus formed a 93-run stand for the fourth wicket and it was finally ended in the 17th over as Erasmus (32) was sent back to the pavilion.

However, crossing the finishing line did not prove too big a deal for Namibia and in the end, the side registered a six-wicket win with six balls to spare.

Earlier, Maxwell O'Dowd played a knock of 70 runs as the Netherlands posted a total of 164/4. Sent into bat first, Netherlands got off to a good start as openers O'Dowd and Stephan Myburgh put on 42 runs inside the first six overs, however, Namibia stormed right back as Jan Frylinck and David Wiese dismissed Myburgh (17) and Roelof van der Merwe (6), reducing the Netherlands to 55/2.

O'Dowd and Colin Ackermann then got together at the crease for the Netherlands and the duo did not let the momentum drop for the Dutch. Ackermann went on to play a knock of 35, but it was O'Dowd who ensured that the Netherlands posts a total of more than the 160-run mark.