Dhawan’s 150 flattens Bangladesh A on Day 2 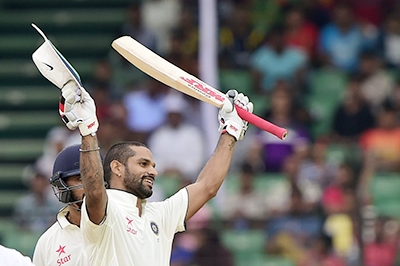 Bengaluru: Skipper Shikhar Dhawan hit a strokeful 150 to help India A declare their first innings on 411 for five to notch up a massive lead against Bangladesh A on Day 2 of the unofficial cricket Test, here today. Getting behind a 183-run deficit, Bangladesh A were 36 for two when bad light ended the day’s play. They still trail by 147 runs with skipper Mominul Haque (9) and Liton Das (7) at the crease. India A pace spearhead Ishwar Pandey (1-4) and off-spinner Jayant Yadav (1-8) shared a wicket each.

Earlier, starting on their overnight score of 161 for one in response to the visitors’ effort of 228, the home side not only saw a crushing knock from Dhawan but also fine fifties from Karun Nair (71) and Vijay Shankar (86).

The visitors heaved a huge sigh of relief when Saqlain Sajib (1-121) trapped Dhawan LBW just after reaching 150 runs but Nair and Shankar ensured that the Bangladeshi bowlers have a hard time at the M Chinnaswamy Stadium.

Ishwar, bowling along with Abhimanyu Mithun (0-21), provided an immediate breakthrough with the new ball. In the third over, Anamul Haque (0) played a loose shot, giving a catch to Nair off Ishwar. Soumya Sarkar (19) put on 17 runs for the second wicket with Haque before Yadav dismissed him.

But the spotlight remained on Dhawan, who proved his form and fitness in style ahead of the South Africa series, striking 18 fours and three sixes in his 146-ball knock. The left-hander was racing against time to get fit before the all-important series after getting injured in the first Test in Galle in Sri Lanka. He missed the next two Tests but the Delhi-born player has come out all guns blazing in this match.

Dhawan also led by example after stitching a 153-run opening stand on Day 1. Today Nair got along with Shankar to manage 108 runs for the fourth wicket. Later wicketkeeper-batsman Naman Ojha (25 not out) also stuck around with Shankar to stitch a 71-run fifth-wicket stand. Leg-spinner Jubair Hossain bagged two wickets after getting the all-important scalps of Nair and Shankar.

But the visitors stare at defeat as India A will now be looking to pick the remaining eight wickets on the third and final day’s play and pour water on the rivals’ confidence ahead of their home series against Australia.