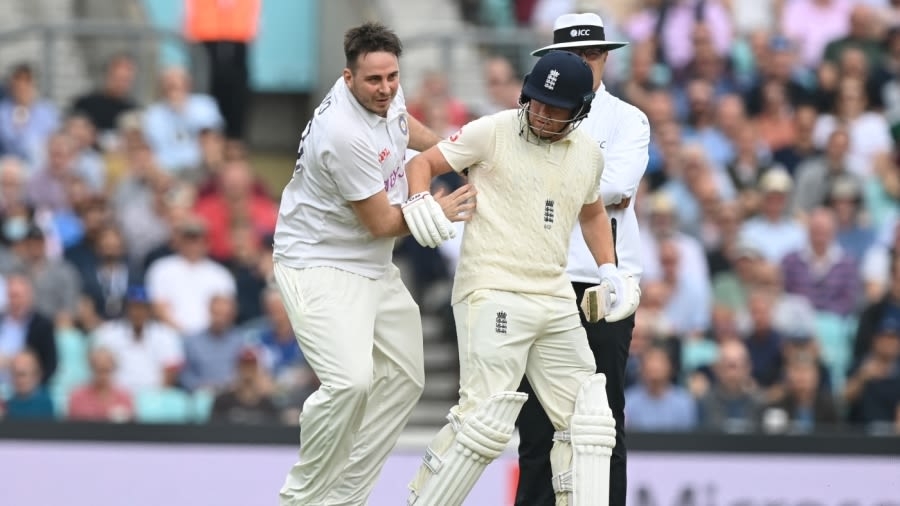 THE OVAL: Test match pitch invader Jarvo -- real name Daniel Jarvis – struck yet again, intruding into the field of play and sprinting across the pitch at Oval on Friday.

For the record, the serial offender has done this in the third successive game, getting past the Oval security ring this time, despite an ECB warning not to permit him entry.

Jarvo ran onto the pitch and delivered a ball from the Vauxhall End in the morning session before bumping into England batsman Jonny Bairstow. Bairstow was livid and India captain Virat Kohli held discussions with both umpires as Jarvis was led from the field by security staff and handed over to the police. He has been booked for assault.

His latest stunt poses a serious question about the security measures in place. The question doing the rounds is how ECB can allow this to happen thrice. Last week at Headingley Jarvis invaded the pitch wearing pads, helmet and a bat. In the second Test at Lord's he had entered the outfield posing as an Indian fielder.

Jarvis is a self-styled YouTube prankster with 127,000 subscribers on his channel named "Jarvo69 aka BMWJarvo".

Commentator Harsha Bhogle took to Twitter and wrote, "A few people need to be sacked at the grounds in England. This is a very serious security lapse and it just continues. Not even a prank anymore. #Jarvo #Idiot."

"Any pitch invasion is completely unacceptable. The ECB and our host venues do not tolerate any such behaviour which risks the safety of players, officials, and staff. The ECB works closely with all our venues to share information and enhance their security operation," said a spokesperson from the England and Wales Cricket Board (ECB).

Some experts and many fans are wondering what would have been the reaction of English media if such a lapse had happened in India. “If this ain't a breach of the bio-bubble, then what is? What's ECB and the UK authorities doing? Once fine, but thrice, come on! This is outrageous. Just imagine if this happened in India, then the English media would've gone bonkers over it,” wrote an English fan on Twitter.

Fans wondered if India were downplaying the incident. ECB have time and again threatened to pull out of tours due to security arrangements in the sub-continent. The incident sheds light on the different lenses people have while viewing the same incident in different countries.

“If the players are under strict Covid protocol and bubble, how insane is that any random stranger can break through the feeble security and get in at any venue and walk up to the players without any consequences,” another fan questioned.