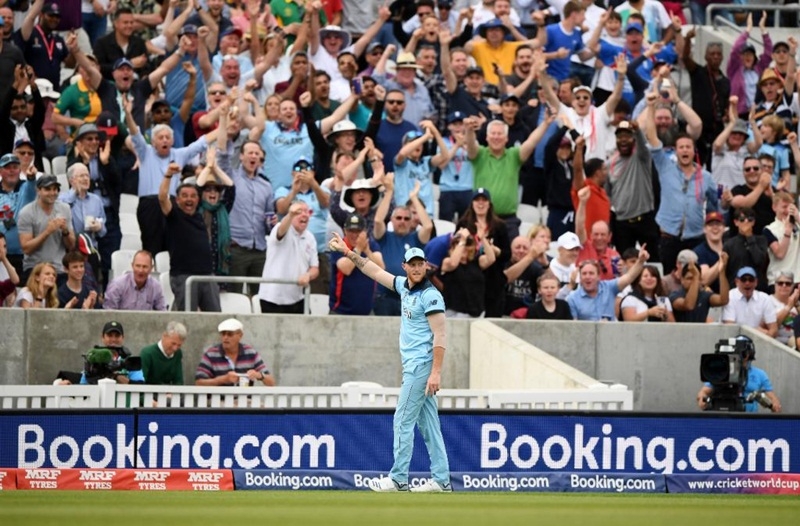 New Delhi: England defeated South Africa by 104 runs in the World Cup opener on Thursday. However, the match will be remembered for the stunning catch that was pulled off by English all-rounder Ben Stokes at the boundary fence.

First, have a look at the catch that was taken by Ben Stokes at the boundary fence to dismiss Andile Phehlukwayo. “Have you EVER seen a better catch? Ben Stokes with a grab that has to be seen to be believed! #WeAreEngland #CWC19,” International Cricket Council (ICC) tweeted.

After seeing the catch, former cricketers took to Twitter to laud Stokes on his brilliance. “Catch of the tournament…Ben Stokes might turn out to be both–The Catch and the one who’s taken the beat catch. [?] #CWC19 #BenStokes #EngvSA,” former Indian cricketer Aakash Chopra tweeted.

“Wow… what about that Ben Stokes … what a catch !!! You can’t practice those #CWC19 #ENGvsRSA One of the best you will ever see,” former Sri Lankan cricketer Russell Arnold posted on Twitter. “The first day of the World Cup and we might have seen the catch of the tournament! #BenStokes,” cricket commentator Harsha Bhogle tweeted.

“WOW!!!! @benstokes38 has just taken the most ridiculously audacious catch in the @ODIWCup_2019 it’s the best catch I’ve ever seen in the flesh, find a screen quickly and see what I mean,” former England off-spinner Graeme Swann tweeted. Ben Stokes starred for the hosts as he displayed an all-round performance. The left-hander scored 89 runs with the bat and picked up two wickets with the ball, picking up the Man of the Match award. England next takes on Pakistan in the World Cup on June 3.