Big game for us: David Miller 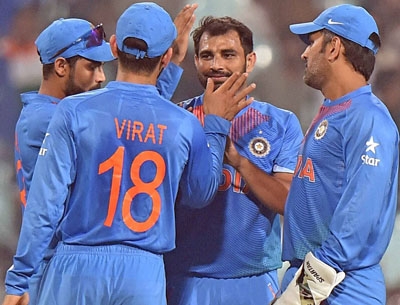 Kolkata: India's bowler Shami celebrate a wicket against West Indies with captain M S Dhoni and other team mates during a warm-up match at Eden Garden in Kolkata on Thursday. PTI Photo by Ashok Bhaumik (PTI3_10_2016_000339B) |

India take on Proteas in a practice match today

Mumbai : South African hard-hitting batsman David Miller believes said that the side has done pretty well in the shortest format in the last 12-18 months and even though they lost the recent series against Australia it was a “good preparation” for the WorldT20.

When asked about the recent 2-1 series loss to Australia in South Africa, Miller said, “The mood was pretty good, they (Australia) beat us 2-1 but it was a good preparation just before the the World Cup, not ideal losing against Australia, but I believe we have done really well over the last 12-18 months…as a T20 side,” said Miller here on Friday.

“And the confidence is really good and we are sticking to a good game plan, the guys are playing accordingly in their certain roles…everyone knows in T20 you can win some and lose some.. we have been pretty consistent, we need to pitch up to each game in the world cup and take it seriously,” the 26-year-old player told reporters at the open media session. Echoing views of many pundits, he said India are favourites being the local side. 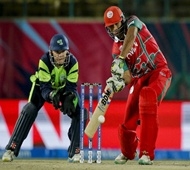 Dharamsala: The Netherlands crashed out of the ICC World T20 after its second qualifying match against Oman was washed out here today. It rained intermittently at the picturesque HPCA Stadium and no play was possible in the first game of the day after Oman won the toss and put the Netherlands in to bat.

“Saturday’s game (against India at the Wankhede stadium) is a big game, a warm up game, we want to win that game,” he said. Miller said that the South African players were pretty familiar to the conditions in India.

“Pretty familiar with the conditions (in India), the place we go to, that has helped a lot and obviously coming from a tour to India, been here few times and I enjoy it,” he says.

According to him, he has no such favorite batting position in the line-up but would like to bat higher-up in the order. “No favorite batting position but would love to (bat) little bit higher, the batting order was flexible (in the series against Australia), that is our key points… I could go in at (number) four in one game, at (number) six in one game, its just about adapting… I will try and make best of the situation when I come in…” he added.

Known for hitting huge sixes, he says among other players who hit such long shots out of the park, he admires swashbuckling West Indies players Chris Gayle the most and also admires his teammate Ab De Villiers. Also, Australia women’s cricket team captain Meg Lanning expects the wickets in India to be turning tracks and said spin will play a major role in ongoing ICC World Twenty20.

“Obviously spin is going play the major part in games. We have been doing a lot of work on playing spin bowling. We can adopt in the little period we have got since arriving here. We are almost used to the Chennai conditions but in all venues we have to rise our game,” Lanning said in a joint press conference with South Africa skipper Mignon du Preez and West Indies captain Stafanie Taylor here on Friday. South Africa’s Preez promised to give their best on the field during the mega-event.

“We have had good preparation playing against England at home and won the series. We also won a series against the West Indies. These matches gave us lot of confidence.

There are expectations from Shami, says Rohit Sharma.

Kolkata: It’s never easy for a fast bowler to make a comeback from a knee injury but Mohammed Shami is working very hard to get his rhythm back and Indian team has lot of expectations from him in the World Twenty20, opener Rohit Sharma said.

Shami had his knee operated last year and has struggled to make it to the team due to lack of proper recovery. He was named in the squad for the series against Australia and Sri Lanka but had to pull out.

Playing his first match after recovery, Shami took two wickets and gave away 30 runs in India’s warm-up game against the West Indies, yesterday.

“It’s never easy for a fast bowler to come back from a knee injury. He’s worked really hard. It was his first game after the layoff and he did pretty well. He’s worked really hard all this while. He executed the plans really well. He bowled bouncers, yorkers, slower ones. That’s what we expect from him. He was one of the main bowlers till the last time he played for India. Expectation will be there on him,” Rohit, who himself hit a sublime unbeaten 98, said.

“He worked hard at the nets yesterday, trying to get his rhythm back. He just wanted to go out in the park and play. It’s about to have a feel the conditions. Once he got on, he bowled well with the new ball and did well with the old one,” Rohit added. The prolific batsman also said that India’s dominant run is a result of excellence in all three aspects of the game.