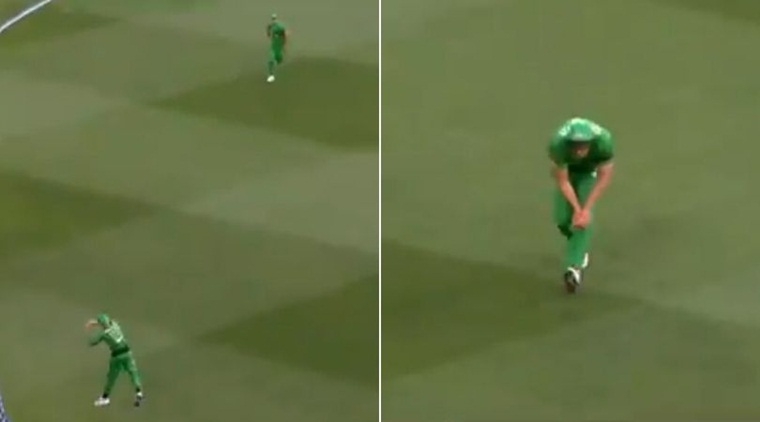 On Saturday, Ben Dunk and Nathan Coulter-Nile joined hands to pull off a stunning catch during the Big Bash League clash between Melbourne Stars and Melbourne Renegades.

Marcus Stoinis starred with the bat as Melbourne Stars defeated Melbourne Renegades by eight wickets in the ongoing Big Bash League (BBL) on Saturday. The stunning catch took place on the third delivery of the 15th over when Shaun Marsh pulled a short of length delivery from leg-spinner Sandeep Lamichhane.

In the 15th over of the Renegades innings, Nathan Coulter-Nile combined with Ben Dunk to complete a brilliant catch in the long-on area to send Shaun Marsh packing on 43. It was the miraculous catch on the boundary that kickstarted a batting collapse and Renegades ended up on a modest 142 for 9 in 20 overs.

Tweeting the video of the catch, the official Twitter handle of BBL wrote: "The MCG is on it's feet! What an effort from Ben Dunk and Nathan Coulter-Nile! #BBL09".

After the dismissal of Maddinson, Ben Dunk came to the crease and played a brief knock of 15 runs. Glenn Maxwell then joined Stoinis and the duo did not allow the asking rate to soar up. The two batsmen put pressure on the bowlers by smashing them out of the park. Maxwell's unbeaten knock of 40 runs in 32 balls propelled Melbourne Stars to victory in 19th over. Stoinis remained not out on 68 runs.

After being sent in to bat first, Renegades lost its opening wicket with just 13 runs on board as Sam Harper (12) was sent back to the pavilion by Nathan Coulter-Nile in the second over of the innings. Renegades' innings suffered a second blow as set batsman Aaron Finch got out on 25. Finch's wicket ended the 42-run stand with Shaun Marsh in the 15th over.

Marsh and Beau Webster came together and stitched a partnership for 62 runs before Webster (29) was sent back to the pavilion by Adam Zampa. After losing Marsh (43), Renegades lost the plot and was quickly reduced to 142/9 in 20 overs. Zampa, who returned with figures of 2-19, was adjudged as the player of the match.