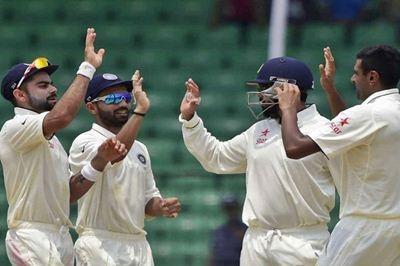 New Delhi: The Board of Control for Cricket in India (BCCI) on Tuesday announced a cash award of Rs.2 crore for the Indian team for beating South Africa 3-0 in the just-concluded Test series.

India defeated the Proteas by 337 runs in the fourth and final Test to win the series 3-0 at the Ferozeshah Kotla in New Delhi on Monday.

Chasing a mammoth target of 481 runs, the visitors were bowled out for 143.

India won the first Test by 108 runs at Mohali and the third match by 124 runs in Nagpur. The second match at Bengaluru was rained off.

“BCCI announces an award of Rs.2 crore to the Indian Cricket Team for their 3-0 series win against South Africa,” BCCI tweeted on Monday.

BCCI’s all top bosses are in the city to attend a governing council meeting of the Indian Premier League (IPL).