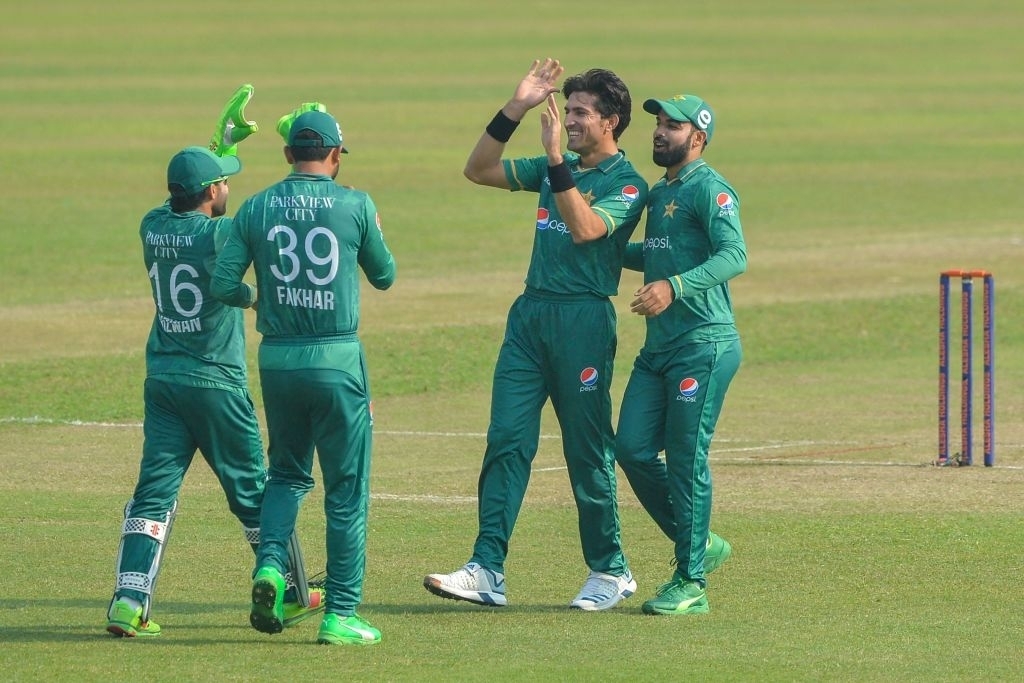 Shadab Khan hit 21 off just ten balls to complement his one for 20 with the ball after Hasan Ali picked three wickets for just 22 runs, and helped Pakistan go 1-0 up in the three-match T20I series against Bangladesh in Dhaka on Friday.

Chasing 128 for the win, Pakistan were in a spot of bother at 24 for four inside the powerplay. Fakhar Zaman and Khushdil Shah steadied the ship with a 56-run stand.

Despite a valiant effort from the Bangladesh bowlers, Shadab Khan and Mohammad Nawaz eventually finished the game off in style with a stunning 36-run partnership off just 15 balls.

Earlier, Bangladesh too struggled but Afif Hossain, Nurul Hasan and Mahedi Hasan helped them post a respectable total on the board.

In hot and sunny conditions, Pakistan pacers made full use of whatever little movement was on offer with the new ball, after Bangladesh elected to bat.

Mohammad Naim was the first to make the long walk back, chasing a delivery wide outside off and nicking it to Mohammad Rizwan behind the stumps. In the very next over, Mohammad Wasim found some movement off the seam and induced an outside edge off debutant Saif Hassan's bat. Zaman made no mistake at first slip as Bangladesh lost their openers.

Najmul Hossain Shanto's stay at the crease didn't last long either, as Wasim forced a rash shot and completed a good catch going backwards off his own bowling.

It wasn't until the fifth over of the innings that Bangladesh got their first boundary. Hossain found the ropes twice in two overs to give some sort of momentum to the innings but the Tigers lost a wicket at the worst possible time when they lost their skipper to a peach of a delivery from Mohammad Nawaz.

At the halfway stage, Bangladesh found themselves at 40 for four. With the scoreboard pressure building, Hossain broke loose in the 11th over with two sixes in two overs.

With Nawaz bowling, the southpaw took full advantage of the angles, tonking the left-arm spinner over his head two balls in a row. His resistance finally came to an end as Shadab Khan got the better of him with a googly, drawing him forward. Rizwan was quick to dislodge the bails as Bangladesh lost half their side for 61.

Nurul ensured Bangladesh don't lose the little momentum they had gained. He smashed Khan for a six and four in the 15th over before taking Wasim over the ropes for his second maximum of the innings.

Brought back into the attack, Hasan ended Nurul's stay at the crease for 28 but a 20-ball 30* from Mahedi Hasan helped Bangladesh post a decent target of 128 for Pakistan to chase down.

In reply, Mustafizur Rahman sent Rizwan's stump cartwheeling in the third over. Babar Azam got a reprieve when Bangladesh failed to hear the nick off his bat but couldn't make most of the lifeline as he played on three balls later. With runs hard to come by, Haider Ali tried to slog sweep Mahedi but was trapped plumb in front of the stumps.

Shoaib Malik was run-out off the last ball of the powerplay in bizarre fashion - trying to guide the ball to third, but couldn't get it past the keeper. Out of the crease, Malik was casual in trying to return to the crease. Nurul hit the stumps directly and the replays showed Malik's bat was still in the air.

Bangladesh continued to turn the screws in the next few overs as Pakistan limped to 40 for four at the halfway stage of the innings, the exact score the Tigers found themselves at the end of 10 overs.

Having spent enough time at the crease, Zaman and Shah broke the shackles and took the attack to Bangladesh. The duo found four boundaries in the next four overs, including a maximum as they brought up their 50-run partnership in the 14th over.

Taskin Ahmed broke through for Bangladesh at a crucial juncture as Zaman departed for 34. Having hit the first ball of the over for a four, Zaman heaved wildly but only managed to nick it to the keeper.

Pakistan lost their other set batter Shah two overs later in a similar fashion to how Zaman was dismissed, edging the ball chasing a wide one outside off.

Needing to defend 32 off the last three, Mahmudullah turned to Rahman for the 18th over. Unfortunately, the move did not pay for Bangladesh as Khan and Nawaz punished the length balls and accumulated 15 runs from the over.

Nawaz turned the game in Pakistan's favour completely in the penultimate over, smashing two sixes off Shoriful Islam to bring the equation down two runs off the last over.

Khan eventually sealed the game with a six, winning the opening game of the series with four balls and four wickets to spare.