Ashes 2021-22: England's Stuart Broad rues lack of practice, concedes that energy and mood in England camp has been low 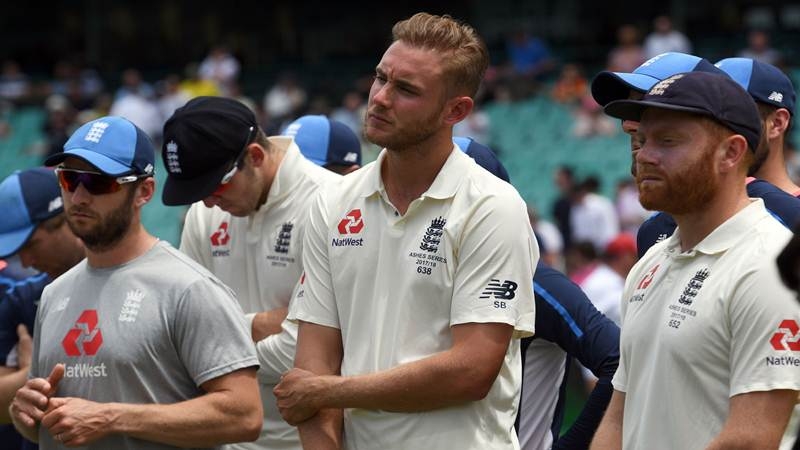 England’s player Stuart Broad (C) and teammates listen to speeches after losing to Australia on the final day of the fifth Ashes cricket Test match at the SCG in Sydney in 2018. | Photo: AFP

England pace bowler Stuart Broad has said that he is frustrated that he hasn't been able to "have an influence for England" in the Ashes, adding that the "energy and the mood in the camp is low" after losing all three Tests so far.

The Joe Root-led England have had an forgettable Ashes so far, losing the opening Test at Brisbane by nine wickets, which was followed by a 275-run humiliation in Adelaide. Australia finally retained the Ashes by handing a crushing innings and 14 runs defeat in the Boxing Day Test in Melbourne.

England are staring at a 0-5 whitewash with the fourth Test at SCG days away and their coaching setup in disarray after head coach Chris Silverwood and stand-in coach Adam Hollioake were forced into isolation.

"Both the energy and the mood in the camp is low. At the start of the tour, I said, partly tongue in cheek, that our preparation was at best average. Unfortunately, the truth in that statement has come to pass. Australia is one of the hardest places to win in Test cricket - look at the percentage of previous England victories here. To do so, everything needs to go in your favour," said Broad in his column for dailymail.co.uk.

Broad has played only one Test -- the second game at the Adelaide Oval -- in the series so far and admitted that "it is frustrating to be left out". The 34-year-old pacer was in the squad of 12 for the opening Test at The Gabba but was excluded from the playing XI. He was again dropped for the Boxing Day third Test.

"Unfortunately our displays have reflected our preparation. Imagine Tiger Woods rocking up at the Masters having not played for four months, spending time in a bio-secure bubble and then seeing his entire practice rained off. He hasn't played a single round of golf, yet he's still expecting to win. Would you bet on him in those circumstances? No, you wouldn't," said Broad.

"The reality is we turned up undercooked while (Australian cricketers) Marcus Harris, Marnus Labuschagne, Travis Head, Cameron Green, Alex Carey, Nathan Lyon, Scott Boland and Jhye Richardson were playing state cricket. Yes, like us, Australia had players at the T20 World Cup until mid-November. But was it a level playing field? Not really," he added.