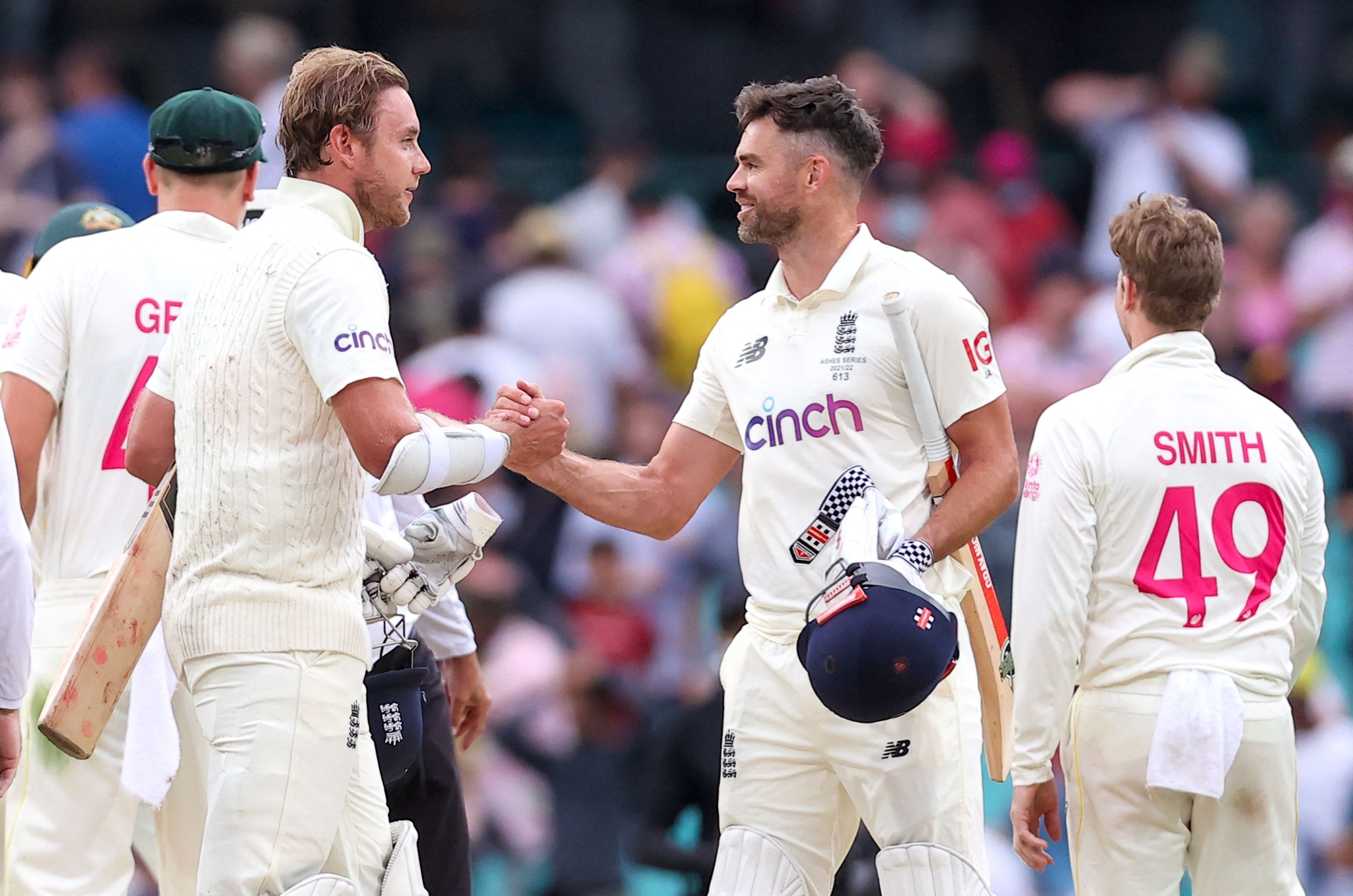 England's tailenders resisted Australia's bowlers in fading light Sunday to clinch a draw on a dramatic final day of the fourth Test in fading light at the Sydney Cricket Ground.

Jack Leach, Stuart Broad and then Jimmy Anderson batted out the final 10 overs under immense pressure, after Pat Cummins and Scott Boland took three quick wickets in the final session before Steve Smith removed Leach with two overs remaining to set up a nervous finale to a gripping test match.

At stumps, England finished 270-9 with Broad unbeaten on eight and Anderson not out on zero to give England their best result of the five-match series which Australia lead 3-0.

With the final hour approaching, Cummins removed Jos Buttler and Mark Wood in the space of three balls to turn the Test on its head after it was looking increasingly likely that England would earn a draw after their most determined batting effort of the series.

Scott Boland then continued his incredible start to Test cricket by having first-innings centurion Jonny Bairstow caught at bat pad by Marnus Labuschagne for 41. It was Boland's 14th wicket in just his second Test after making his debut in Melbourne where he was named player of the match.

But Broad and Leach saw out the remaining 10 overs despite Australia have all their fielders around the bat in catching positions as the fading light meant they had to bowl spinners Nathan Lyon and Steve Smith in the final three overs.

Earlier in the session, Stokes, no stranger in proving to be an immovable object for Australia after his heroics in the 2019 Ashes series in England, did not appear to let the pain of his left side injury curtail his attacking shots as he crushed ten boundaries and a six as part of his 60 runs, to go with his 66 in the first innings.

But Lyon eventually made the vital breakthrough as he caught Stokes in two minds as to whether play at the ball or leave it. In the end he did neither and guided a simple chance to Steve Smith at slip. It was the ninth time that Lyon took Stokes' wicket, including twice in this match.

As the final hour loomed, Cummins (2-80) made a big breakthrough trapping Buttler lbw for 11. On-field umpire Paul Reiffel initially rejected the appeal before Cummins referred to the TV umpire, who reversed the decision.

Two balls later Cummins dismissed Wood with a vicious in-swinging delivery that hit the tail-ender on the foot for a much easier lbw decision for Reiffel to confirm.

Boland then had Bairstow caught at bat pad to expose England's tail, but Leach and Broad and then Anderson found a way to survive despite up to nine fielders in close catching positions.

Before tea, Joe Root and Stokes combined for a 60-run partnership from 26 overs before Scott Boland had the English skipper edging through to wicketkeeper Alex Carey for 24 to give Australia renewed optimism that they may be able to bowl England out.

Needing to bat out the day to draw the Test after being set an improbable 388 to win, the tourists lost a very defensive-minded Hameed (9) and Malan (4) in the morning session, but Zak Crawley decided that attack was the best form of defense as he unleashed eight boundaries on his way to a 69-ball half-century.

Hameed was dropped by Carey off Pat Cummins, but only survived a few overs more as he again edged through to Carey, who made the catch, to give Scott Boland yet another wicket in his bright start in Test cricket.

Lyon (2-28) was introduced into the attack and in his third over found a way through Malan's defenses to have England at 74-2 after the first hour of play.

Crawley's enterprising innings was halted at 77 after 13 boundaries when Cameron Green (1-38) captured the 23-year-old opener leg before wicket.