Despite World Cup semi-final loss, Virat Kohli thinks 2019 has been one of the best years for Indian cricket

Kohli hailed India's pace-bowling department saying that they can 'bowl out any opposition anywhere'.
ANI 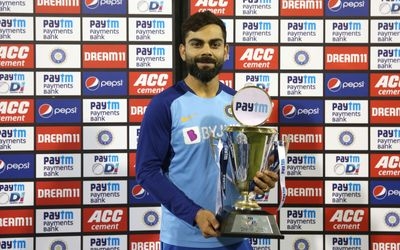 Virat Kohli lifting the series trophy after India's thrilling win over West Indies that helped them to win the series 2-1. | BCCI

Skipper Virat Kohli has said that 2019 has been one of the best years in Indian cricket apart from the team's heartbreaking loss in the ICC World Cup semi-final match against New Zealand.

India faced a semi-final exit in the World Cup tournament in England after the Kiwis defeated the Men In Blue in the tournament.

"2019 has been one of the best years for Indian cricket. Apart from the 30 minutes (in the semifinal loss against New Zealand) in the World Cup. It's been a great year. We'll keep chasing that ICC trophy, this group deserves it for the amount of hard work we have put in. We have a vision in place," ICC quoted Kohli as saying.

India holds the number one spot on the ICC World Test Championship table with 360 points followed by Australia, who have 216 points.

India won the three-match ODI series against West Indies by 2-1 after beating the visitors by four wickets in the series decider at Cuttack on Sunday.

Kohli hailed India's pace-bowling department saying that they can 'bowl out any opposition anywhere'.

"Having a bunch of fast bowlers who can bowl out any opposition anywhere - them taking the attention away from the spinners in India is a huge achievement. We feel we have it in us to win series overseas, not just the odd game," he said.

The 31-year-old skipper himself had a brilliant year as he amassed 2,370 across formats. This is also the fourth consecutive time that Kohli has scored 2,000-run plus runs in a calendar year.

The Indian captain said there is no way he is stopping as there is an exciting year coming up.

"Personally I have enjoyed batting, but there is no way I am stopping. There is an exciting year coming up. I understand my batting really well. I want to play within my limits, knowing the gameplan you want to execute is very important," Kohli said.