With 8701 runs and 111 wickets in 304 matches in ODI cricket, Yuvraj Singh was a prominent all-rounder India could dream of.
Vikas Singh Derek 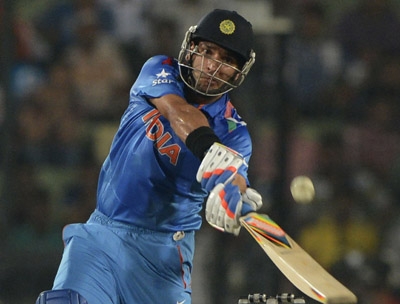 Yuvraj Singh is probably India’s most loved cricketer and was one of the spectacular stars of Indian domination in limited-overs cricket tournaments during ICC 2007 T20 World Cup and ICC World Cup 2011. He retired from international cricket today, bringing down curtains to his well-celebrated cricket career where he achieved many milestones as an Indian cricketer.

On the occasion, we look back at two crucial incidents from Yuvraj Singh’s childhood, which shaped his career in cricket and forced him to show his dedication and hard work towards achieving his sporting goals in the Gentlemen’s Game.

One incident is of when Yuvraj was sent to Navjot Singh Sidhu for cricket coaching. On the first day of practice, he was bowled by full toss deliveries and Sidhu was very angry over the same. Sidhu, who was also friend of Yuvraj’s father Yograj Singh, told the latter that ‘your son cannot ever play cricket’; reasoning that he is not even able to touch the ball with his bat while batting.

This incident was also shared by Yuvraj during his presence on ‘Comedy Nights with Kapil Show’, with Sidhu sitting just in front of him. Yuvraj, however, proved Sidhu’s prediction wrong and became a cricketer whom no Indian cricket fan will ever be able to forget.

Another incident is during his early teens, when Yuvraj brought some medals in skating and showed them to his father. But his father, also a former Indian cricketer, threw those medals after seeing them. Later, he also disposed of the skates. Although this incident may have hurt Yuvi a lot, he might have also understand his father’s dream of him playing cricket. In spite of his interest in skating, Yuvi understood his father’s expectations well and became a cricketer, who was not only great at batting, but also clever with bowling.

With 8701 runs and 111 wickets in 304 matches in ODI cricket, Yuvraj Singh was a prominent all-rounder India could dream of. With the bat, he smashed 14 hundreds and 52 fifties in 278 innings, something which defines his amazing ability with the bat.

He also took 111 wickets while bowling in 161 ODI innings, which proves he was a good left-hand bowler too. He also took a five-wicket haul (5/31) in ODIs, which are his best bowling figures in the format. He made his international debut on October 3, 2000 and played his last international match in June 2017 – a glorious career spanning 17 years.