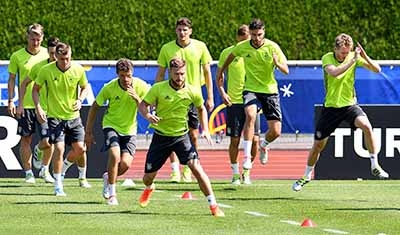 Germany´s players warm up during a training session at the team's training grounds in Evian on July 1, 2016, on the eve of the Euro 2016 quarter-final football match between Germany and Italy. / AFP PHOTO / PATRIK STOLLARZ |

Bordeaux : Europe’s titans clash when Germany and Italy meet in the plum Euro 2016 quarter-final with huge stakes for both countries.

Germany captain Bastian Schweinsteiger is poised to make his first start in the Bordeaux match, while Italy’s veteran defender Daniele de Rossi faces a race to be fit.

Like two heavyweight boxers eyeing up their opponent before the first bell, both teams have talked up the respect factor and down played the significance of Italy winning the last eight meetings at major tournaments.

In the most recent matches, Italy claimed a 2-1 win in the Euro 2012 semi-finals while Germany romped to a 4-1 win in a meaningless friendly in March.

Joachim Loew’s Germany insists they have no ‘Italy trauma’ as they look to beat the Azzurri at the ninth attempt on a big stage and throw off their Italian shackles.

Antonio Conte’s Italy has compared taking on the world champions as football’s equivalent of ‘climbing Everest’. Italy have their own trauma after crashing out of the 2014 World Cup in the first round.

Both squads insist this will be their toughest test so far at the European Championship finals. No doubt penalties have been practised behind closed doors, should the tie be decided by a  shoot-out. The Azzurri proved they are up for the challenge by dumping previous holders Spain out of the competition with a 2-0 win in the last 16.

But Conte’s team will have to become the first team to score past the Germans at Euro 2016, unless the tie is settled by penalties. The clear, often repeated, German message this week has been of great respect, but no fear of the Azzurri.

As has been well documented in the media of both European footballing powerhouses, Italy has a rare unbeaten record over Germany at major tournaments.

“It doesn’t mean anything to me that we have never beaten Italy in a big tournament”, said Germany midfielder Toni Kroos.

“They are the best team we will have faced here. I’m looking forward to the game and I’m very optimistic.”

But the question will be whether previous failures appear at the back of German minds should Italy take the lead in Bordeaux.

Torino striker Ciro Immobile, who spent an unhappy season at Borussia Dortmund, is not impressed with the respectful noises coming from the Germans. “We’ve beaten them so many times … they’re just trying to cover themselves,” he said.

“We know Germany are strong and will be sure of themselves. But our victory over Spain has really lifted our confidence.”

Germany have all their players fit and no suspensions. Centre-back Jerome Boateng has recovered from a calf strain which made him doubtful for the 3-0 win over Slovakia in the last 16. The burly Bayern Munich defender scored his first international goal against Slovakia.

After three Euro 2016 appearances off the bench, Die Mannschaft’s leader Schweinsteiger is poised to make his first start after a knee injury.

Germany’s shot-stopper Manuel Neuer is on a record run of five games unbeaten, a first in the 108-year history of the German FA, which includes the 2-0 warm-up win over Hungary.

Italy have Thiago Motta suspended and are waiting on the fitness of two other midfielders. Italy’s De Rossi is almost certain to miss out after injuring his right thigh in the win over Spain.

Likewise, Lazio winger Antonio Candreva is doubtful after suffering a hamstring injury in their 1-0 group stage win over Sweden nearly two weeks ago.