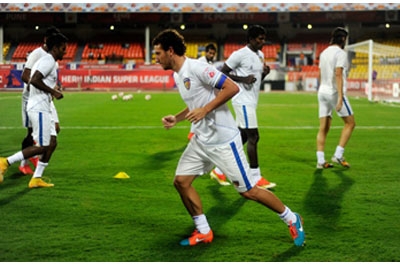 Pune : The first leg of the Indian Super League (ISL) semi-final between Chennaiyin FC and Atletico de Kolkata (ATK) will be held here at the Shiv Chhatrapati Shivaji Stadium on December 12 due to the recent floods in the southern city, it was confirmed on Tuesday. “IMG-Reliance and Star India along with the Chennaiyin FC management conclude to the decision of moving the Club’s home ground to Pune, after evaluating all possibilities for Chennai to host the semi-final match,” said an ISL release. “The decision was particularly difficult as Chennaiyin FC’s fans have displayed immense passion and fortitude to support their Club through thick and thin this season. But it was one which had to be taken, keeping in mind the current situation in Chennai,” the release added. Most parts of Chennai are still under water after the heaviest rains in some 100 years, which have left around 269 people dead. The second leg of the semi-final will be played in Kolkata on December 16.