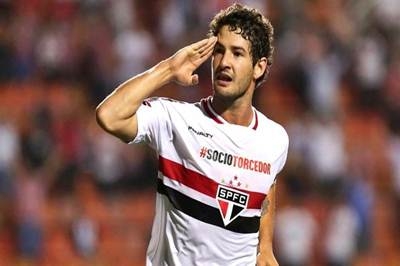 London: Chelsea have completed the loan signing of Brazilian striker Alexandre Pato from Corinthians until the end of the season, the London giants announced. Pato, 26, will add to Guus Hiddink’s attacking options at Stamford Bridge with Diego Costa currently shouldering responsibility for providing the side’s goal-threat now that both Loic Remy and Radamel Falcao are injured.

“I am so happy to sign for Chelsea. It is a dream for me. I am looking forward to meeting and getting to know my new
team-mates and cannot wait to play,” said Pato. “I thank Chelsea for their support and hope I can repay this faith to the club and the fans.”

Pato began his career at Internacional in Brazil before moving to AC Milan in 2007. In his first season in Serie A, under the guidance of former Chelsea boss Carlo Ancelotti, he scored 14 goals in Milan’s title-winning campaign of 2010/11.Pato left the San Siro in 2013 having scored 63 goals in 150 appearances.

He returned to Brazil to play for Corinthians and subsequently enjoyed a successful loan spell at their city rivals Sao Paulo before moving to Chelsea.Pato has won 27 caps for Brazil, scoring 10 goals, and represented his country at both the 2008 and 2012 Olympics.