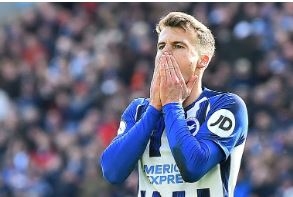 Brighton fans can still "support" their team even if they are not allowed into Premier League games... by paying for cut-outs of themselves to be placed in the stands.

The Premier League season is due to resume on June 17 after a three-month break due to the coronavirus pandemic.

Brighton are following in the steps of Bundesliga clubs, who have populated their grounds with fake fans after matches were forced behind closed doors.

The Seagulls, who are two points above the relegation zone with nine games remaining, return to action against Arsenal on June 20.

"We are asking fans to don their blue and white matchday attire and send in their picture to be part of the remaining five matches of the season to be played at the Amex," the club said in statement.

"With the last five games of the 2019/20 season taking place behind closed doors, the club is offering season-ticket holders and MyAlbion+ members the chance to purchase their own personalised cut-out."

Personalised cut-outs cost £20 ($25) each, with part of the profits donated to charity.

The only catch? You can't "sit" next to family and friends.

"Unfortunately, we won't be able to place cut-outs in specific seats, nor guarantee cut-outs of family and friends are situated next to each other due to the nature of the project," the club said.