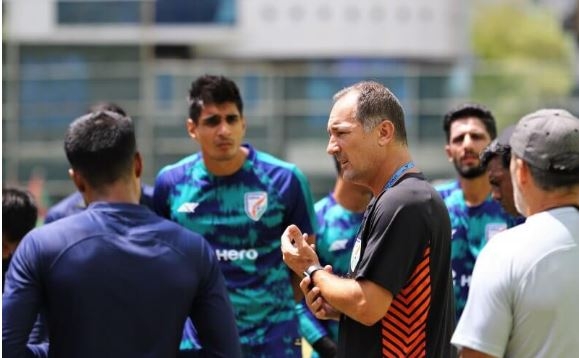 Male:Having endured a topsy-turvy beginning to their campaign before a fine turnaround, seven-time champions India will start title favourites when they take on first-time finalists Nepal in the summit clash of the SAFF Championships here on Saturday.

The final will be the 12th for India in 13 editions which shows the domination of the Blue Tigers in this regional tournament. The third-place finish in 2003 was the worst performance for them.

A win against Nepal will also be head coach Igor Stimac's first trophy after taking charge of the Indian team in 2019. Should the team come good, he will become the sixth coach to win the SAFF Championships title and third foreigner after Jiri Pesek (1993) and Stephen Constantine (2015).

India drew against Bangladesh and Sri Lanka in their first two matches which had put them in danger of missing the final but the win against Nepal brought them back in the reckoning.

The 3-1 outplaying of hosts Maldives, thanks to a double strike from talisman Sunil Chhetri, sealed India's place in the final. The frayed nerves before the must-win Maldives match are no longer there after a dominant win over the defending and two-time champions, who were considered the toughest opponents in the region but the job is not yet done.

Nepal, ranked 61 places below India at 168th, have shown that they are no pushovers in this tournament and it needed a late goal (82nd minute) from Chhetri for India to beat them in the round-robin match. They have beaten Maldives while drawing with Bangladesh.

India will, however, have the psychological advantage over the Himalayan country as historical or recent statistics will show that Stimac's side is the clear favourites to lift the title yet again. In the three matches played between the two sides so far this year, India won twice and drew once.

Before the SAFF Championships, India played two international friendlies against Nepal in Kathmandu last month, drawing one (1-1) and winning the other (2-1).