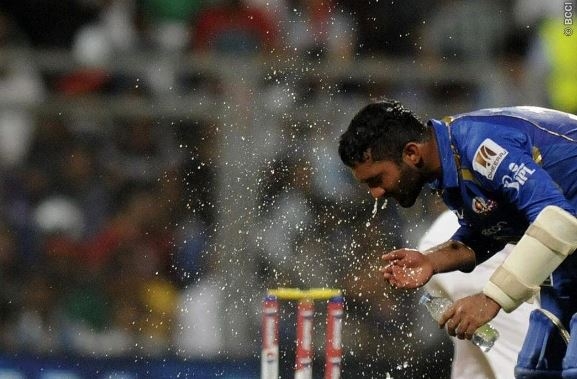 Dubai: Dubai at this time of the year is no less than a hot oven with temperatures soaring to an excruciating 42 degrees C but, with the Indian Premier League action returning to the Emirates, cricketers have no option but to sweat it out and take all the necessary precautions to ensure they don't succumb to heat-strokes or other heat-related illnesses.

On Wednesday, two days after Royal Challengers Bangalore lost the opening IPL match against Kolkata Knight Riders by nine wickets, the franchise posted a five-minute video of a practice match between RCB-A and RCB-B played a couple of days after the players had emerged from the mandatory six-day quarantine to show how tough and unrelenting the conditions are when players come out for their matches every single day.

"The 38 to 42 degrees, sun beating down on you + humidity & you're still expected to play a match like it doesn't really matter. How's that possible? Let's find out in What's It Like," tweeted RCB as they posted the video for IPL Bold Diaries.

More than 100 litres of bottled water goes into keeping the 30-odd players hydrated for the duration of the match, lasting four hours, not to mention the tons of other contraptions such as ice boxes, cold towels, ice vests, and "lots of other forms of ice" that go into ensuring the player don't "lose their cool" in the desert heat.

Explaining the process team physio, Evan Speechly said that, "It's important that we adapt to the heat and the humidity. When the guys came out of isolation, it was very hard to adapt. It was important to keep them hydrated. We try to encourage them to drink as much water as possible. We have a team of qualified doctors in our support staff who help our players keep up with the hot and humid conditions."

Another member of the support staff said that they use a super-cooling towel to ensure the players' bodies don't get overheated.

"A super-cooling towel has to be activated first by putting it in ice-cold water and twisting it around and then it is wrapped around the player (neck). This will maintain your body temperature and keep the player cool in this incredible heat. So the amount of heat loss is also under control. Ice boxes, cold towels, ice vests, and lots of other forms of ice are used to keep body temperatures down."

South African stalwart AB de Villiers, who had just spent nearly 90 minutes on the ground in the practice game said, "When I got out of the bus, I thought it would be a crazy game of cricket in the middle of the day in the desert. It was too hot, but after sometime I simply stopped thinking."

He said that it was a myth that players take the aerial route more often in hot and humid condition. "I must say I have been guilty of getting out like that (catches in the deep) before but when I play for RCB or for the Proteas in any serious game you don't do that."

Another RCB player KS Bharath said that being professionals "we train for this (heat). The preparations don't come on to the ground just like that. In the rooms, we spend hours sitting in the balconies every day to acclimatise to the heat. It all adds up and makes you better prepared for the heat and humidityÂ… it takes your confidence forward," he said.