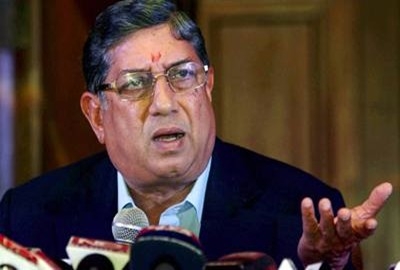 New Delhi: The Supreme Court hearing of a petition related to the controversial role of Board of Control for Cricket in India (BCCI) president N.Srinivasan in the 2013 Indian Premier League spot-fixing and betting scam re-opens today.

The BCCI legal team is expected to defend Srinivasan, players and officials involved with the Indian Premier League (IPL) against serious charges of corruption.

A high-profile inquiry panel, headed by former High Court judge Justice Mukul Mudgal, had submitted its reports to the apex court on February 10. The panel also submitted a confidential envelope that reportedly contains the names of a few Indian cricketers and a few top officials.

The hearing on this case, which began on Tuesday, was ominous for the 69-year-old Srinivasan, as Justice A.K. Patnaik, one of the two judges, had lashed out at the BCCI chief with harsh words, saying: “Why is Srinivasan not stepping down? It is so nauseating? Why is he sticking to the president’s post?”

What, there fore, are the options before the BCCI boss? One option for Srinivasan – who underwent cataract surgery on Wednesday – is to step down, in line with the court’s wishes; the other is for him to brazen it out and, if Justices A.K. Patnaik and Ibrahim Kalifulla do carry out their threat to unseat him, and go into appeal.

More heat has been put on Srinivasan with three of the five BCCI vice presidents — Shivlal Yadav, Ravi Sawant and Chitrak Mitra — putting pressure on Srinivasan to honour the Supreme Court’s observation. But the Tamil Nadu strongman has stuck to his guns.

The first option available to Srinivasan would be to file a review application.

If the court dismisses the review, Srinivasan has one more avenue: the curative petition. This application is also heard by the judges in their chambers and it is their discretion whether or not to consider the plea.

An ideal scenario for Srinivasan would be to ensure that the matter is delayed through legal arguing about his willingness to “stand aside” rather than resigning until the probe is completed.

This scenario could lead to a situation where the case is pushed to its next hearing a month later, towards the end of April, just before the Supreme Court’s month-long summer break in May.

When the court resumes, a new judge will have to be appointed to the case as Justice Patnaik is due to retire from June 3.

But if Srinivasan, resigns and is replaced by an interim BCCI president, he can make a comeback at the elections in September, provided the inquiry has been concluded and Srinivasan receives a clean chit.

According to the BCCI’s constitution, Shivlal Yadav, the former Test off-spinner from Hyderabad and one of the five vice-presidents, is the front-runner to be president if Srinivasan is removed.

Yadav had chaired a meeting of the BCCI working committee in February, when Srinivasan opted out due to bereavement in the family.

The IPL betting and fixing case began in June last year when the secretary of the Cricket Association of Bihar (CAB) Aditya Verma filed a PIL in the Bombay High Court. After a two-member BCCI probe commission, appointed by Srinivasan and Co, gave Meiyappan and Rajasthan Royal’s Raj Kundra a clean chit, hell broke loose.

Verma promptly filed an affidavit in Bombay High Court pointing out Srinivasan’s conflict of interest, since he owned Chennai Super Kings and Meiyappan was the husband of his daughter. The BCCI doesn’t recognize Verma’s CAB.

Srinivasan had stepped aside in June 2013 after his son-in-law Gurunath Meiyappan’s name cropped up in the fixing scandal, which had to led to ban on paceman S Sreesanth and his two other Rajasthan Royals colleagues. In his absence, former BCCI chief Jagmohan Dalmiya discharged the duties of the President. However, at the BCCI AGM in September 2013, Srinivasan was re-elected as President.