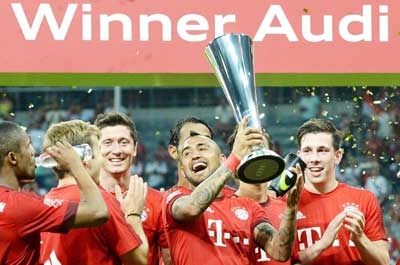 Tottenham Hotspur clinched the third place as they beat AC Milan 2-0 on Wednesday.

The German giants wrapped up their first title of the season thanks to the late 1-0 winner by Robert Lewandowski, Xinhua reported.

The hosts controlled the proceedings on the pitch but they were unable to turn their advantage into a tangible reward in the first half. Thomas Mueller rattled the post before Real Madrid goalkeeper Diego Navas denied Mario Goetze from a promising position just before the break.

The Spaniards nearly flabbergasted the hosts after the restart but Bayern Munich goalkeeper Manuel Neuer denied Toni Kroos’ dangerous free-kick with a diving save.

Bayern Munich responded at the 61st minute but Polish international Robert Lewandowski failed to tap in a cross by Douglas Costa into the open goal.

As the match progressed, the “Bavarians” pressed Real Madrid into the defence to open the scoring in the 88th minute.

Bayern’s new arrival Douglas Costa crossed the ball from the right wing to the near post where Robert Lewandowski poked home the winner into the bottom right to seal the deal with two minutes remaining.

With the result the German champions lift the Audi Cup trophy for the third time after 2009 and 2013. Meanwhile, after losing to Real Madrid on Tuesday, Tottenham Hotspur claimed the third spot following a 2-0 victory over an uninspired AC Milan.