The incident panned out when Zimbabwe’s Seam Williams swept Deepak Hooda's delivery to the deep square leg area. Kishan was quick to chase down the ball and throw it back. Axar, who was in the midwicket area, had to duck to ensure the throw didn’t hit him.

A blinded Axar tried to cover his head but despite his best effort, the ball hit him on his body.

Immediately, Axar turned and gave a fiery look to Ishan indicating he did not find it amusing, Kishan saw the funny side of it and put out his hand for an apology immediately.

Meanwhile, comeback man Shardul Thakur was the wrecker-in-chief as the Indian bowlers once again came out on top to skittle out Zimbabwe for 161 on Saturday.

In the absence of Deepak Chahar who missed out after his exploits in the last ODI, Thakur made his presence felt and rocked the Zimbabwe top-order with his double blow in the 12th over. He finished with fine figures of 3/38 in seven overs.

Sean Williams played a counter-attacking knock and top-scored for the hosts with a run-a-ball 42 (1x6, 3x4) after his side was reduced to 31/4 in the 13th over. 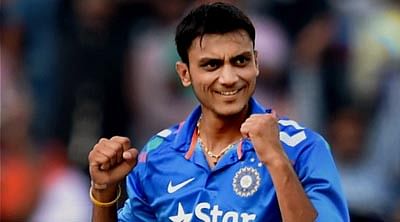