HomeSportsAustralia knocked out of T20 World Cup despite beating Afghanistan? Here's how the Group 1 stands

Australia knocked out of T20 World Cup despite beating Afghanistan? Here's how the Group 1 stands

Glenn Maxwell's unbeaten 54 from 32 deliveries followed by Adam Zampa and Josh Hazlewood's brilliant spells guided Australia to a 4-run victory over Afghanistan in their Super 12 clash of the ongoing T20 World Cup 2022 here at Adelaide Oval on Friday.

However, the win over minnows Afghanistan did not guarantee them a place in the semis as England are still to play Sri Lanka tomorrow.

Australia needed to win by a big margin in order to stay in a safe position in the semi-final race. This win has given them valuable two points but it hasn't improved their Net Run Rate much. Their Net Run Rate now is -0.173, lower than England's +0.547.

If England win their next match against Sri Lanka on Saturday, Australia will get eliminated from this World cup. Coming to the match, Rashid Khan scored the highest for Afghanistan with unbeaten 48 runs off 23 deliveries while Gulbadin Naib played a knock of 39 off 23 balls. For Australia Zampa and Hazlewood bagged two wickets each respectively.

Chasing a target of 169, Afghanistan got off to a bad start as they lost their openers Usman Ghani and Rahmanullah Gurbaz in under 6 overs of the game. Usman Ghani was sent packing by Josh Hazlewood after scoring 2 runs off 7 balls. Kane Richardson then gave Afghanistan another blow as he dismissed Gurbaz for 30 off 17 in the 6th over of the game.

New batters Ibrahim Zadran and Gulbadin Naib then held the charge as they kept piling runs while scoring boundaries at regular intervals. After 10 over Afghanistan's score read 72-2.

Gulbadin and Zadran then opened their hands and slammed Richardson for 17 runs with the help of two fours and one six. The 13th over delivered by Pat Cummins was one of the most economical as the pacer conceded just 2 runs. Gulbadin's blistering knock of 39 off 23 was cut short as he was run out by Glenn Maxwell.

Adam Zampa then sent Zadran packing after scoring 26 off 33, on the fourth delivery of Zampa's over saw the bowler deliver a stunning bowl to dismiss Najibullah Zadran for a two-ball duck. In the 14th over delivered by Zampa Australia bagged three wickets while conceding just three runs, leaving Afghanistan tottering at 99/4.

Josh Hazlewood was brought back in the attack and the pacer delivered a stunning bowl to dismiss Mohammad Nabi for just one run. Rashid Khan then came out to join hands with Darwish Rasooli on the crease.

Rashid Khan then slammed back-to-back two sixes on the delivery of Richardson in the 18th over of the game. Courtesy of Rashid's fone innings Afghanistan's winning equation went down to 21 needed off the final over. On the first ball of the last over Darwish Rasooli was run out by Marcus Stoinis after scoring 15 off 13.

Rashid then slammed two fours and a six in the last over but failed to guide his team home and handed Australia a 4-run victory in a thrilling clash.

Earlier, Glenn Maxwell's half-century propelled Australia to 168/8 against Afghanistan at the Adelaide Oval in the Super-12 encounter. Mitchell Marsh and Maxwell played handy knocks for the team to take Australia to a par score after losing wickets at a regular level.

After being put into bat first, Australia started fiercely with opener David Warner firing on all cylinders from the start of the inning. Warner smashed three boundaries in the second over to bag 16 runs off the second over.

However, his opening batter Cameron Green could not replicate Warner's success and walked back to the pavilion after getting dismissed for 3(2) in the third over. Mitchell Marsh walked in at number three with great responsibility on his shoulders in the absence of Aaron Finch.

Warner kept scoring boundaries for the Aussie team to keep the scoring rate at a decent pace and Australia looked on course to a great powerplay but Naveen-ul-Haq bowled a superb last powerplay over to dismiss Warner and Steve Smith to reduce Australia to 54/3 at the end of the six overs.

Marsh looked to place the ball in gaps before exploding in the ninth over to smash Gulbadin Naib for 16 runs with the help of a six and two boundaries. Australia reached the 10-over mark at 85/3 with Marsh and Marcus Stoinis at the crease.

Afghan spinner Mujeeb Ur Rahman dismissed Marsh in the 11th over to bring out Glenn Maxwell on the crease. Maxwell went after the Afghan bowlers right from the start to help Australia up its run rate.

Stoinis on the other hand was struggling to get going and was dismissed by Rashid Khan for 25(21) in the 16th over. Despite the fall of wickets Maxwell continued playing the big shots and notched up his half-century off 29 deliveries. He helped Australia get to 168/8 at the end of the 20 overs. The batter remained unbeaten and carried his bat through the inning.

Naveen-ul-Haq was the pick of the bowlers picking up three wickets while giving away just 21 runs. 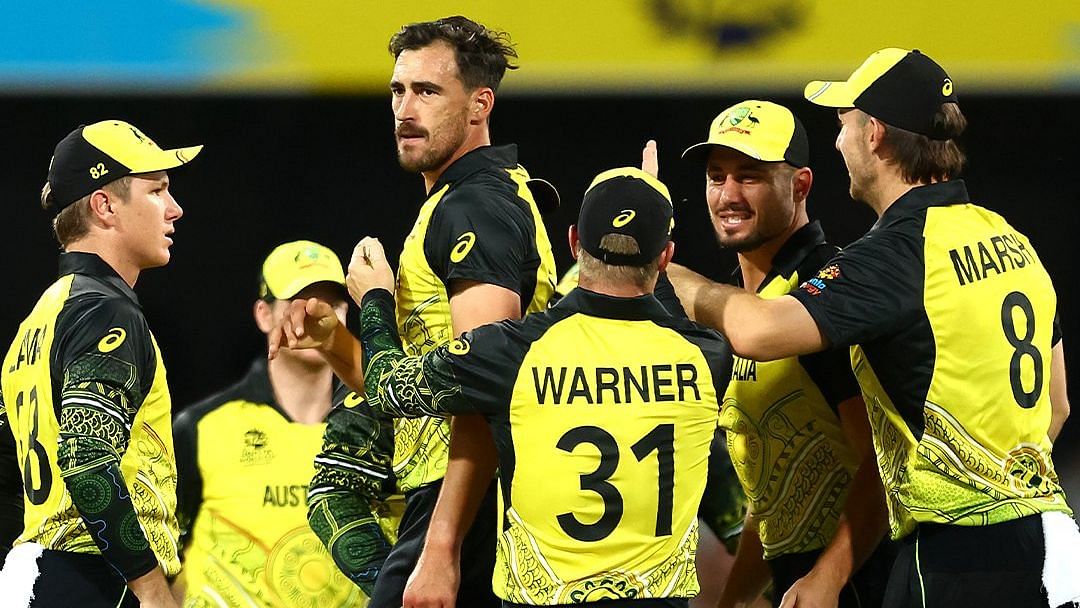