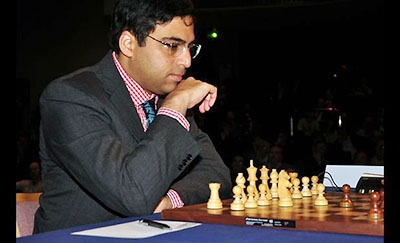 On what turned out to be an easy day as black in the final round, Anand just had to follow his instinct as Caruana decided not to press the Indian in a routine opening theory.

World champion Magnus Carlsen of Norway capitalised on a blunder by Rauf Mamedov of Azerbaijan to seal another super tournament victory. Carlsen finishing with a tally of seven points speaks volumes about the gap between him and the rest in terms of rating points.

Carlsen took his rating to 2875 points after his remarkable show here and Anand not only entered the 2800 club again but will also be seen at number two in world rankings next month after a long time.

The Indian ace was at the top of his game here and only Carlsen could supersede him in terms of points scored. While Carlsen won five and drew four, Anand won three and drew six games here.

Caruana and Wesley So tied for the third spot in this 100000 Euros prize money tournament organised in memory of Grandmaster Vugar Gashimov, scoring an identical five points. Caruana needed a victory to match Anand on points but he was denied.