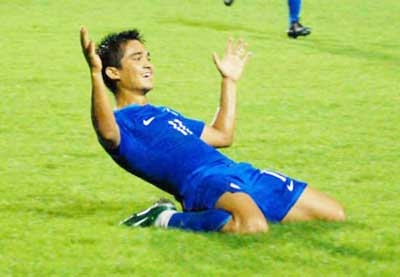 New Delhi :  All India Football Federation on Monday made it clear that all the national team players who are in the Indian Super League sides will be released on time for the two 2018 World Cup qualifier matches to be played next month.

India take Turkmenistan on October 8 and Oman on October 13, both away matches, and AIFF General Secretary Kushal Das said that all the players who are with the ISL teams will be released four days prior to the first match.

“The reports that national teams players in the ISL will not be released for two World Cup qualifiers next month are completely wrong. All of them will be released four days — inclusive of the match day — prior to the first match. This is under FIFA rules,” Das said.

“So, the players will join the national team on the morning of October 5 and continue to be with the team till the second match on October 13.

“There was no confusion on that as this was decided by the AIFF and the ISL long back,” he said.

Almost all the national team players who took the field against Iran on September 8 are in the ISL teams. The second edition of the ISL begins on October 3 in Chennai.

India play Guam on November 12 in a home match and then take on Iran on March 24 (away match) and March 29 (home match).

Earlier, it was reported in the media that the ISL organisers had declined to allow the national players for India duty.

With the cash-rich football league about to kick-off on October 3rd, most of the national players are on club duty and will not be will released for a camp which is scheduled to start on September 29.

The national coach Stephen Constantine confirmed there will be no preparatory camp before the World Cup Qualifiers.

“It is a norm to release national players at least four to five days before a FIFA game, but unfortunately this is not going to happen,” Constantine told NDTV.

Chhetri, who also plays for the I-League team Bengluru FC, had termed Turkmenistan encounter a crucial one.

“The game against Turkmenistan is very important game for us.

“We will focus on playing positively like we played against Oman and Iran and hopefully we will get a win against Turkmenistan and get a point,” —AGENCIES