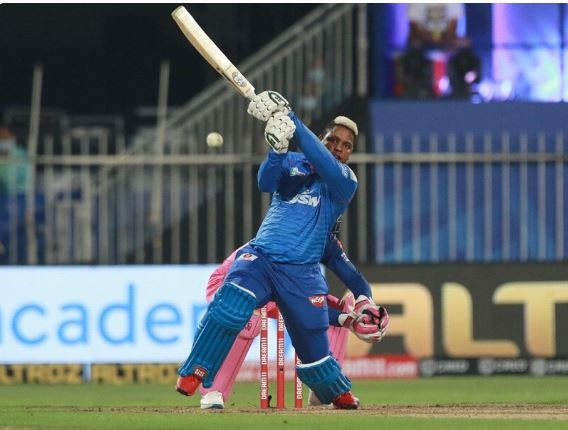 Dubai: Delhi Capitals yet again scripted an escape, this time against Chennai Super Kings. Chasing a modest target of 137, DC reached 139 for seven in 19.4 overs, with Shikhar Dhawan top-scoring with a 35-ball 39. Shimron Hetmyer contributed a vital 28 just when it appeared that Delhi, at 98/5, were losing their way.

Shardul Thakur and Ravindra Jadeja took two wickets apiece while Deepak Chahar, Dwayne Bravo and Josh Hazlewood got one each.

Ambati Rayudu top-scored for CSK with an unbeaten 55 off 43 balls while Robin Uthappa contributed 19 runs.

Rayudu reached his fifty when he slashed Anrich Nortje over point for a boundary, following a six over deep extra over in the innings' 19th over, from which CSK scored 14 runs.

However, Avesh Khan bowled a fantastic final over in which he conceded only four runs while taking the wicket of Mahendra Singh Dhoni (18).

Rayudu smashed five fours and two sixes during his stay in the middle.

A major part of DC's bowling effort was a far cry from pacer Nortje's horrendous first over when he conceded 16 runs, with nine off them coming off a leg-bye and a bye that Rishabh Pant couldn't get his hand to despite a diving attempt.

In between, Ruturaj Gaikwad was given out lbw, but the decision was overturned after the batsman reviewed as TV replays showed the ball was missing the leg stump.

Faf du Plessis got two boundaries on either side of the wicket against Avesh Khan as CSK raced to 26 in only two overs at the Dubai International Cricket Stadium.

There was swing on offer but DC's bowlers were not able to get their act right until left-arm spinner Axar Patel struck when du Plessis' attempted pull shot was held by a diving Shreyas Iyer in the deep mid-wicket region.

The in-form Gaikwad welcomed Kagiso Rabada with a drive straight down the ground, even as Robin Uthappa, playing this game in place of Suresh Raina, walked into the middle.

Nortje removed Gaikwad in the fifth over when the batsman failed to connect his pull shot for Ravichandran Ashwin to complete a neat catch.

From scoring over 25 runs in the first two overs, CSK found themselves ploughing along at 48 for two at the end of the six power play overs.

CSK were 69 for four in 10 overs but their bigger concern at that of time was that they lost two more wickets -- Moeen Ali to the impressive Axar and Uthappa to Ashwin's carrom ball.

Both CSK and DC have already qualified for the play-offs.

Chennai Super Kings, Delhi Capitals and Royal Challengers Bangalore have qualified for the Play-offs, but the fight for the fourth and final spot has heated up. So how do the teams stack up?

The frontrunners for the fourth spot. They have 12 points from 13 matches, with a positive net run-rate of +0.294. They are the only team to have a positive NRR among the four teams that are still in contention for the Play-offs spot. If Kolkata win their match against Rajasthan Royals by a good margin on October 7, it's curtains for other teams.

Defeat to Royal Challengers Bangalore has severely dented their chances. They will have to beat Chennai Super Kings by a huge margin on October 7, hope KKR lose to RR and Mumbai Indians beat RR. That said, RR and MI have to lose their other matches by a big margin. They need a generous dose of luck and have all the permutations and combinations going their way. Fair to say it's almost over for Punjab.

Nothing complex here. Their upcoming matches are against MI and KKR. They will have to win to enter the play-offs.

Their upcoming matches are against RR and SRH on October 5 and 8 respectively. Their net run rate of -0.453 doesn't make for a good reading. They will have to win both by a huge margin. If KKR win their next match, it gets trickier for them.