V Gangadhar speculates on how the now defunct Team Anna who have the Olympics on their mind. will solve Indias problems. 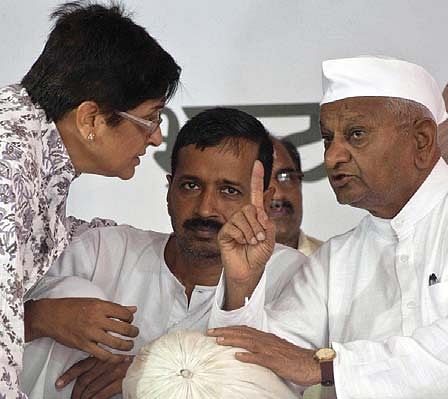 The euphoria generated by Team Annas decision to go political and form a party of its own had not died down. Already there is massive planning on the course of action to be taken to solve major current issues.

Leading from the front as usual was Arvind Kejriwal, who had overtaken Anna as the live wire of the movement.

Everyone admitted it was his inspired singing, which galvanised other members to opt for a political movement. But Anna told Kejri not to sing any more in public because he feared that music directors and recording companies would vie with one another to snatch him from the Movement.

From now on, Kejri will not sing but only talk on which he was an expert. The first major offensive of Team Anna was its stalwarts would fly to London immediately and organise indefinite fasts there. ‘We had to do this,’explained Anna. ‘Injustice must be stopped from every forum in life. The London movement will set an example and announce the arrival of our movement to the entire world.’Kiran Bedi looked pleased. ‘Do we have a sponsor for our visit to London so that I can plan to fly Economy Class and charge the sponsor first class fare? I am running short of funds.’You can arrange all that on your own,’snapped Kejri. ‘But Annaji, why are we flying to London? There is so much to be done here.’

ANNA SMILED. ” THE ANNA MOVEMENT WOULD CREATE A SMALL OLYMPIC VILLAGE AT JANTAR MANTAR WHERE THE MEDALS WOULD BE DISTRIBUTED TO INDIAN SPORTSPERSONS… WHAT SURESH KALMADI AND OTHERS FAILED TO ACHIEVE IN 50 YEARS WE SHALL ACHIEVE IN JUST ONE WEEK.”

‘You are impatient,’chided Anna. ‘I said the movement had to fight injustice. What is happening in London? Something called Olympics. Some countries and their representatives were winning dozens of gold medals, others including India were starved. Wasn’t this injustice? We shall also demand that Fasting must be made an item in the Olympics from 2016. We can win the gold, silver and bronze in this event.’The Anna team burst into applause.

‘As on today, someone called Phelps had won 22 medals in swimming’explained Anna. ‘This was human greed at its worst. What can a person do with so many medals? Members of our team will start indefinite fasts that this Phelps gave up al his medals except one and distributed the rest of them among the participants who had won none.

‘Is that clear?’Equality, fraternity, Liberty,’shouted Kejri. ‘This calls for a song’. But a stern look from Anna silenced him. Kiran Bedi moved forward, ‘My friends on the CNN- IBN Channel told me they had hired some one called Carl Lewis as one of their experts to comment on the games. Lewis, an American, you will be interested to know had also won nearly 20 medals in four consecutive Olympics. He should also part with his loot.’Excellent,’beamed Anna. ‘We shall do that and target Lewis, he would not know what had hit him.’Once we get the surplus medals from these winners, how do we distribute them among the other participants?’asked Santosh Hegde. ‘If you want a retied judge to handle the issue, I am ready.’Anna nodded thoughtfully. ‘Perhaps on the basis of the population of the medal- less nations,’he said.

‘China would not get any of these medals because they have already a hoard. India should get the maximum because we were the largest and most populated nation in the world after China and we had very few medals.’I have blueprints of our plans ready,’said Kejri waving papers. ‘We shall fast outside the Olympic Village and the venues. Our movement will attract international media attention. The greedy nations will hand over their excess medals to us. We shall carry them with us to India.’Anna smiled. ‘What a wonderful idea. The Anna movement would create a small Olympic village at Jantar Mantar where the medals would be distributed to Indian sportspersons. A great honour for India and Team Anna. What Suresh Kalmadi and others failed to achieve in 50 years we shall achieve in just one week.’Kejri cleared his throat. ‘Perhaps we should celebrate this unprecedented success with a song.’But Anna silenced him with a glare.