Not This Kind of March, Please 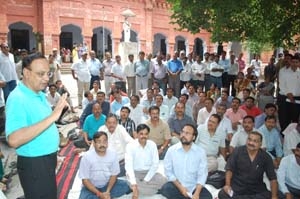 V Gangadhar reviews a dignfied march to the British High Commission. The conversation was prim and propah.  Almost!

It is not often that one witnessed such public unity in India. The march to the British High Commissioner’s office in New Delhi was orderly, slogans were raised in a muted voice, one saw order and discipline everywhere. Every one seemed to be in the march – politicians from all parties, volunteers from India Against Corruption units, farmers, urban working classes.

Public peeing is universal, it has the largest volunteers in India and it is thriving despite so many government regulations. No, it is not just a British problem. Because some wise guy either in the government or an NGO will start a similar movement in India.

Official: Thank you for being peaceful? It is time for High Tea, would you like some cucumber sandwiches, hot scones, cake and tea? We can offer you Darjeeling, China or Ceylon tea.

Marchers: We don’t want anything from you people. Just order your government to cancel this degrading, offensive order recently introduced. It directly affects people like us. The order is inhuman, it has to go.

Official: What order? We are not aware of any order, which would have an adverse impact in India. Our government wants to have the best relations with the Indian government and its people .

Marchers: How innocent you sound as if you did not know anything? We read how some of your cities are planning to organise a ‘March of Shame’ of people who peed in public. Such people even peed on historical structures and heritage sites causing damage. That did not mean you should make them march in public. This rule is shameful  and we want its immediate withdrawal.

Official: But Sir, this is strictly a local issue, an internal matter of Britain. How did it affect you? Why should you take out a march against such an order?

Marchers: Ha, I shall tell you. And do you what its impact could be?

Official: Please tell me, I am new to your great country.

Marchers: Yes, though we are great, our roads are not. They are already overcrowded with too many people, cows, morchas, uncontrolled traffic and what not. And by following the example of London, if we order ‘Marches of Shame’ of those who peed in public, there will be no place for us to walk. In fact, we have to spend millions to build new roads just to accommodate the offending peers. And what will you do if we approached your government for economic aid for these new roads?

Official: Yes, sir. I see your problem, which could turn into our problem. I shall brief the High Commissioner on this delicate issue, which should not affect longstanding excellent Indo-British relations. Sir, the High Tea has arrived. Please help yourselves.

Marcher: Tea can wait, show me the lavatories. Otherwise you will have to organise the March of Shame now itself!