RRR choreographer Prem Rakshith comes on board for Vishnu Manchu’s next; to design special dance number with him and Sunny Leone

After the mammoth success of 'Naatu Naatu' from SS Rajamouli’s 'RRR', one hears that choreographer Prem Rakshith will be designing steps for Vishnu Manchu and Sunny Leone.

A source says, “The shooting of the movie is currently on in Hyderabad. The team this week will be canning a special dance number on Vishnu and Sunny at a specially built set in Ramoji Film City.”

The much-awaited film starring Vishnu alongside 'RX100' bombshell Payal Rajput is an action comedy entertainer, being directed by Eeshaan Surya. The movie stars Sunny Leone in a key part. The source also adds, “This film is designed to be a commercial entertainer and is gaining good buzz with every passing day. Besides the stardom of Vishnu, the film is going to have punchy dance numbers. Earlier, they’d got Prabhudheva to do a dance sequence and now Rakshith. The choreography is superlative. The actors will be training in the steps for a few days before the shoot commences.”

Prem says, “It is an absolute joy to be working with Vishnu and Sunny. It’s a great song and we’ve had a blast creating the steps for it. It’s an energetic track and with their vibe they have only elevated the dance number.”

The story and screenplay have been penned by Kona Venkat, who’s also the creative producer of the film. Cinematographer Chota K Naidu is behind the lens while Anup Rubens is composing the pulsating music. 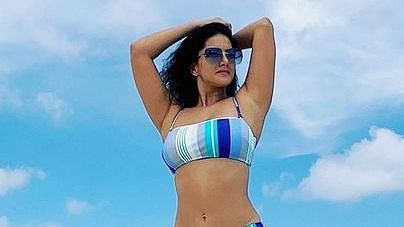