Advertisement
Home / Entertainment / Regional-film-news / Amruta Khanvilkar on working with Prasad Oak in 'Chandramukhi': 'It was a life-changing experience'

Amruta Khanvilkar on working with Prasad Oak in 'Chandramukhi': 'It was a life-changing experience'

From being a big name in the Marathi film industry to bagging significant roles in Bollywood films like 'Malang', 'Satyameva Jayate' and 'Raazi' among others, actress Amruta Khanvilkar has time and again received immense appreciation and praise from the audience. She will next be seen playing the role of a Lavani dancer in the film Chandramukhi.

The Free Press Journal caught up with the actress for a chat where she spoke about the film and shared her experience of working with director Prasad Oak and co-star Adinath Kothare.

Amruta calls the film a life-changing and career-altering experience. "I have been working on this film for two-and-a-half years. I cannot put the experience in words because when you give so much time for one project and when you dedicate yourself wholly and solely to one project, you cannot find words to put together that experience," the actress gushes.

Opening up about her role in the film, Amruta says, "Chandramukhi is not just one character but the entire film is Chandramukhi. I would say that Chandramukhi is sacrifice and love. Chandramukhi is the preservation of our culture and Lok Kala. And, she as an artist, is doing everything in her power to give Lok Kala artists a platform. All she dreams is about giving an art form, which is dying in Maharashtra today, a very very big stage. To tell you about the character, she is a Lavani Samradhini, a poetess, and a Krishna bhakta."

She adds excitedly, "Audiences can expect an intense love story. A love story that has not come in years and years in Marathi cinema. It is a love story about Lavani Samradhini and a political leader and because of their love how their lives get entangled and obviously, the audience can expect outstanding music from the one and only Ajay-Atul. They can expect some beautiful-looking sets and extremely gorgeous frames."

Besides Lavani, Amruta also learned a different language for the film. Elaborating on how she prepared herself, the actress shares, "I trained with Ashish Patil and the way he does Lavani is outstanding. Nobody today in India does Lavani the way he does. In fact, Prasad (the director) used to give me old songs and ask me to choreograph them. So, a lot of our workshops also included singing old songs which had rural language. I learned a very different language and some great words which I don't think I will ever be able to forget."

However, Amruta says that the most difficult part for her was undergoing a physical transformation for the film as she gained nearly 15 kilos.

Continuing further, Amruta added that working with director Prasad Oak was like being in an institute. "I had to unlearn and learn a lot of things. But Prasad being an actor-director, knows his scripts and characters so well that every word and every pause was literally worked on. Also, shooting with Prasad and doing workshops with him is extremely challenging because he is a director who wants things in a certain way and he will not let you go until and unless you have it."

Amruta and Adinath Kothare have a few romantic scenes together in the film. She reveals how he made her comfortable before those scenes, "Adinath and I hit it off really well. We both are extremely passionate people when it comes to working. What Adinath gave me in this film as Daulat is an immense comfort. I was a little hesitant while doing romantic scenes so I used to tell him 'listen, can I just hold your hand or can we just take a walk?'. And he was right there for me. I have worked with him before as well but this time it was completely different."

A few days back, an actress reportedly stirred a controversy by saying she was first approached for the film to play the lead role. The director reportedly stated that Amruta was the first and only choice for Chandramukhi. On the other hand, Amruta says she has no idea about the controversy. "I'm absolutely unaware of this. I have my own journey with this film and I have been with this film for the last two and a half years. I think I'm so immersed in my own journey and the promotions of my own film that nothing else is getting my attention right now," she signs off. 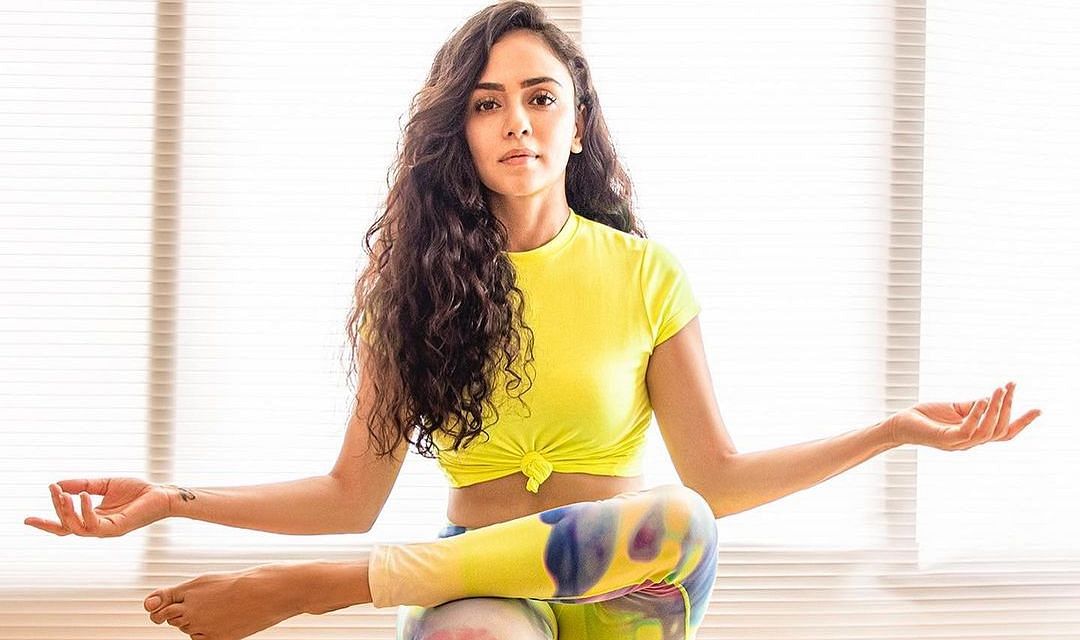 'Yoga helped me improve my mental health during the pandemic,' says Amruta Khanvilkar