Government to come out with Model Theatre Policy and Single-window clearance for Theatres, to reverse trend of declining theatres. “Cutting-edge technology of direct-to-mobile broadcasting being explored to bring high-quality digital content on mobile phones, with no data consumption”. Amendments to Cinematograph Act proposed to be tabled in winter session of Parliament: I&B Secretary

The Union Secretary for Information and Broadcasting Apurva Chandra has exhorted the media and entertainment industry to set a target of growing the industry to more than 100 billion dollars by the year 2030. “India will be a 10 trillion dollar economy in the next 10 years, we should target that the media and entertainment sector should grow to more than 100 billion dollars by 2030. The Ministry of Information and Broadcasting will do whatever it takes to support the M&E sector and help it grow.” The Secretary was addressing the inaugural session of FICCI Frames Fast Track 2022 in Mumbai today, September 27, 2022.

The Secretary announced that Invest India is going to be leveraged in order to bring in higher foreign investment into India in the film sector. “The Ministry has merged various film units under one; NFDC based in Mumbai is going to be the hub of the cinematic arm of the government. With this, we want to revamp the Film Facilitation Office. We are going to hand this over to Invest India, the main investment arm created by the government under the leadership of Prime Minister Narendra Modi, to attract industry to India. More than 100 billion dollars of FDI is coming to India this year. We want to leverage Invest India to bring in foreign investment, we will reach out to foreign filmmakers to come to India.”

The Secretary informed that the government will work with states to facilitate and promote film shooting in India. “Recently at Cannes Film Fesival, we announced Incentive Scheme for Audio-Visual Co-production and Incentive Scheme for Shooting of Foreign Films in India. With incentives given by states too, it becomes a viable and attractive package for filmmakers.” 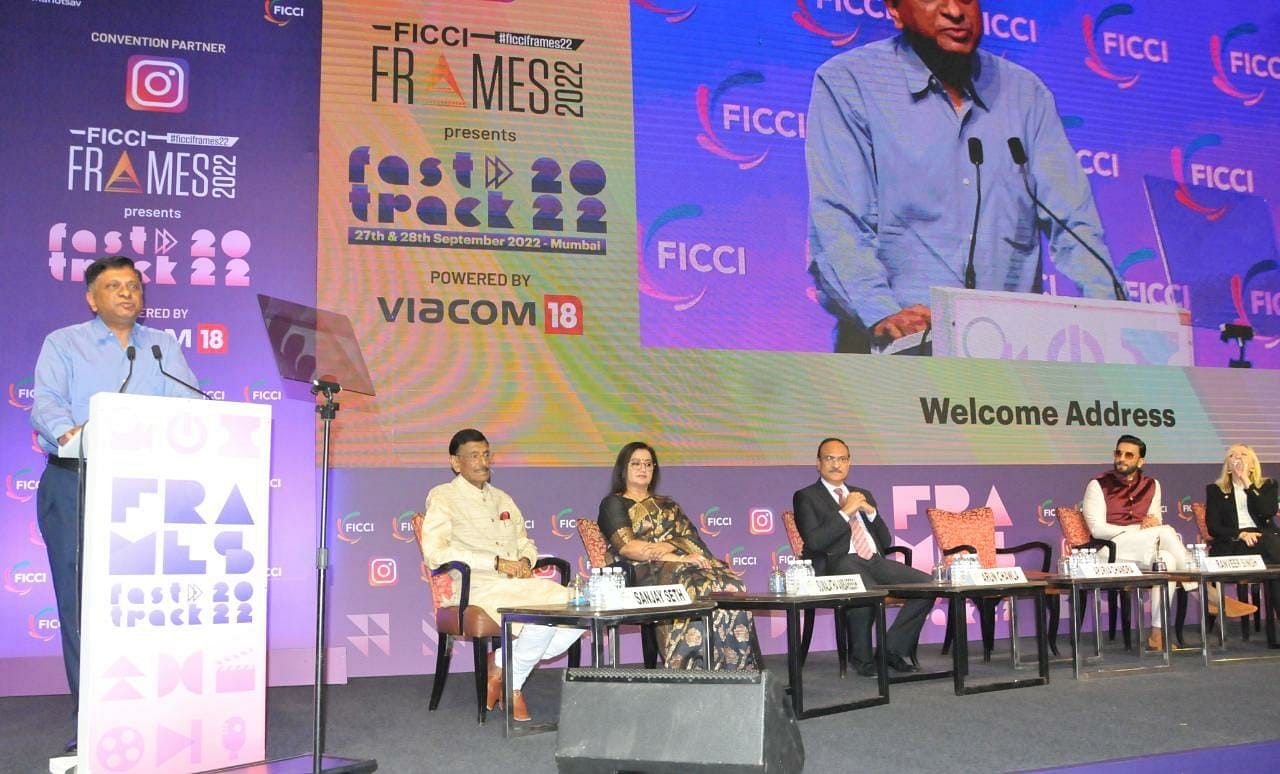 The Secretary announced that the Government of India will work with the states and formulate a Model Theatre Policy. “Over the past 5-6 years, the number of theatres has been on a decline. We need to reverse this trend. We will assign the Film Facilitation Office to work with Invest India to come up with a single-window portal for opening theatres, so that more and more theatres can come up and the public gets more avenues to watch the magic of films in theatres. We will also work with the states to create a Model Theatre Policy, so that the states can adopt and work on the same.”

Observing that viewing habits of people have changed due to COVID-19 pandemic, the Secretary noted that when ticket prices were brought down to Rs. 75 three days back, all shows were full. “This shows that if price points are right, people can afford theatres. The craving to go to the theatres is there, so we need to work on how we can bring people back to theatres.”

The Secretary told the industry that he had a fruitful meeting with some stalwarts of the film industry yesterday, on the proposed amendments to the Cinematograph Act. “All stakeholders present supported proposed amendments for introduction of anti-piracy provisions and age classification with UA category.” With the support of the film industry, we hope to table the amended Bill in the winter session of the parliament, he added.

The Secretary informed that the Animation, Visual Effects, Gaming and Comics (AVGC) Promotion Task Force constituted by the Ministry of I&B will submit the report within the next 15 days or so. “We are compiling the reports of the sub Task Forces, and thereafter we will submit the recommendations and go through the process of adopting the report.” The Secretary told the industry that AVGC is the future. “The best of Hollywood films are now getting created in Bengaluru and other places, AVGC is the next revolution like the IT revolution 20 years back.”

The National Centre of Excellence for AVGC is going to be set up in collaboration with the private sector, the Secretary informed. “I am happy to inform you that we have taken the in-principle decision to set up the AVGC Centre of Excellence in collaboration with the private sector. We are proposing a 48% stake for the Ministry of I&B, 26% for FICCI and 26% for CII, so that it is the private industry and not the government which leads the AVGC transformation. We hope that the Ministry of I&B functions as a catalyst for the upsurge in the media and entertainment industry.”

Indian citizens will soon be able to watch high-quality film and entertainment content on their mobile phones, with no data consumption however, the Secretary informed. “In India, we never think of data costs, since data is much cheaper than in other countries. That gives a huge opportunity to media and entertainment industry. With 5G coming, there is another opportunity of direct-to-mobile broadcast. Prasar Bharati, in collaboration with IIT Kanpur, has come up with a proof-of-concept, where more than 200 channels can be watched and high-quality films can be watched on mobile phones, without consuming any data, using direct-to-mobile broadcast.” The Secretary expressed confidence that this change will happen within next 3-4 years.

The Information and Broadcasting Secretary underlined the importance of Media & Entertainment Skills Council in creating more jobs in the sector. “Many people are now watching content on OTT platforms, but pace of content creation has increased, giving more jobs to more people. Media & Entertainment Skills Council has a big role to play in this, since skilling is the most important part in creating more jobs.”

FICCI FRAMES Fast Track will have plenary and parallel sessions along with workshops and master-classes on issues/topics covering various aspects of media & entertainment such as Films, Broadcast (TV & Radio), Digital Entertainment, Animation, Gaming and Visual Effects. Stakeholders from industry like CEOs of Media & Entertainment companies, film producers, directors and other business and creative minds from the industry attend the event every year, along with senior representatives of central and state governments.

Time2Grow with the Government of Maharashtra, is organizing the 14th 'The Education Summit' on...

Acharya Balkrishna enlisted among top 2% scientists across world in a study by Stanford University...