In Photos: On the occasion of Gandhi Jayanti, leaders across the political spectrum pay respects to the 'Mahatma' 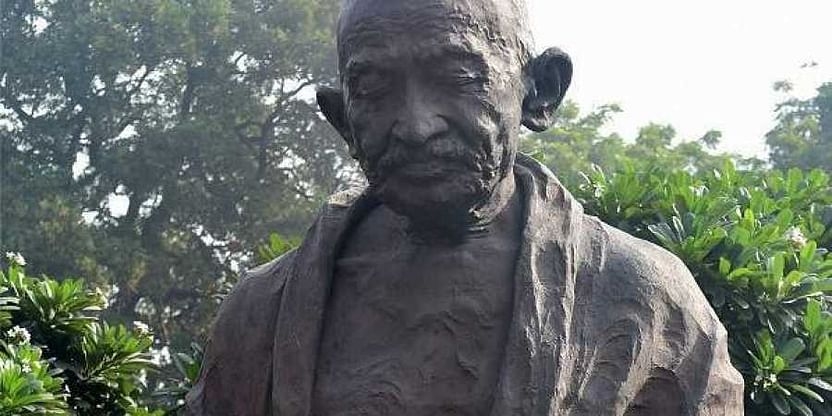 Mohandas Karamchand Gandhi, famously referred to as 'Mahatma' (great soul), was killed on January 30, 1948. However, his life and teachings are celebrated across the world even today.

On Gandhi's 152nd birth anniversary, several leaders across the political spectrum paid homage to the father of the nation.

Indian Prime Minister Narendra Modi paid homage to Mahatma Gandhi, saying his life and ideas will inspire every generation to walk the path of their duties.

"I bow to respected Bapu on Gandhi Jayanti. His noble principles are globally relevant and give strength to millions," he added.

The prime minister the visited Raj Ghat memorial to pay his tribute to Gandhi. 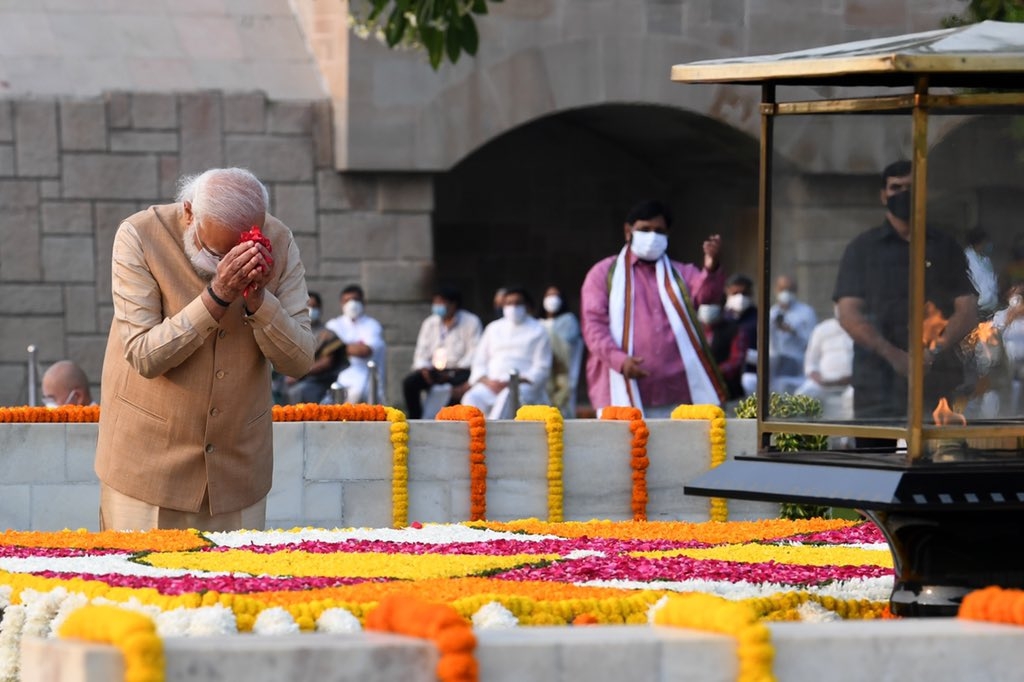 The Prime Minister paid tributes to Mahatma Gandhi at Rajghat on the special occasion of Gandhi Jayanti. | Twitter/@PMOIndia

President Ram Nath Kovind paid floral tributes to the father of the nation at Raj Ghat on Saturday.

Paying tribute to Bapu, President Kovind asked people to take pledge to strive for making India a country of his dreams.

"Homage to Bapu on #GandhiJayanti. It is a special day for all Indians to remember Gandhiji's struggles and sacrifice. Let us take a pledge that we will continue to strive for making India a country of Gandhiji's dreams while adhering to his teachings, ideals and values," said Kovind in a tweet today.

Maharashtra Chief Minister Uddhav Thackeray while paying his repects to Mahatma Gandhi said "Gandhiji's life gives a message of self-sufficiency, dignity of labour, cleanliness and rural development. He has been a great ambassador of peace and non-violence."

On the occasion, Thackeray hailed the 'safai mitras' (sanitation workers) and frontline workers for performing their duty of ensuring cleanliness during the COVID-19 pandemic, and said the union urban development department's decision to honour their work was commendable 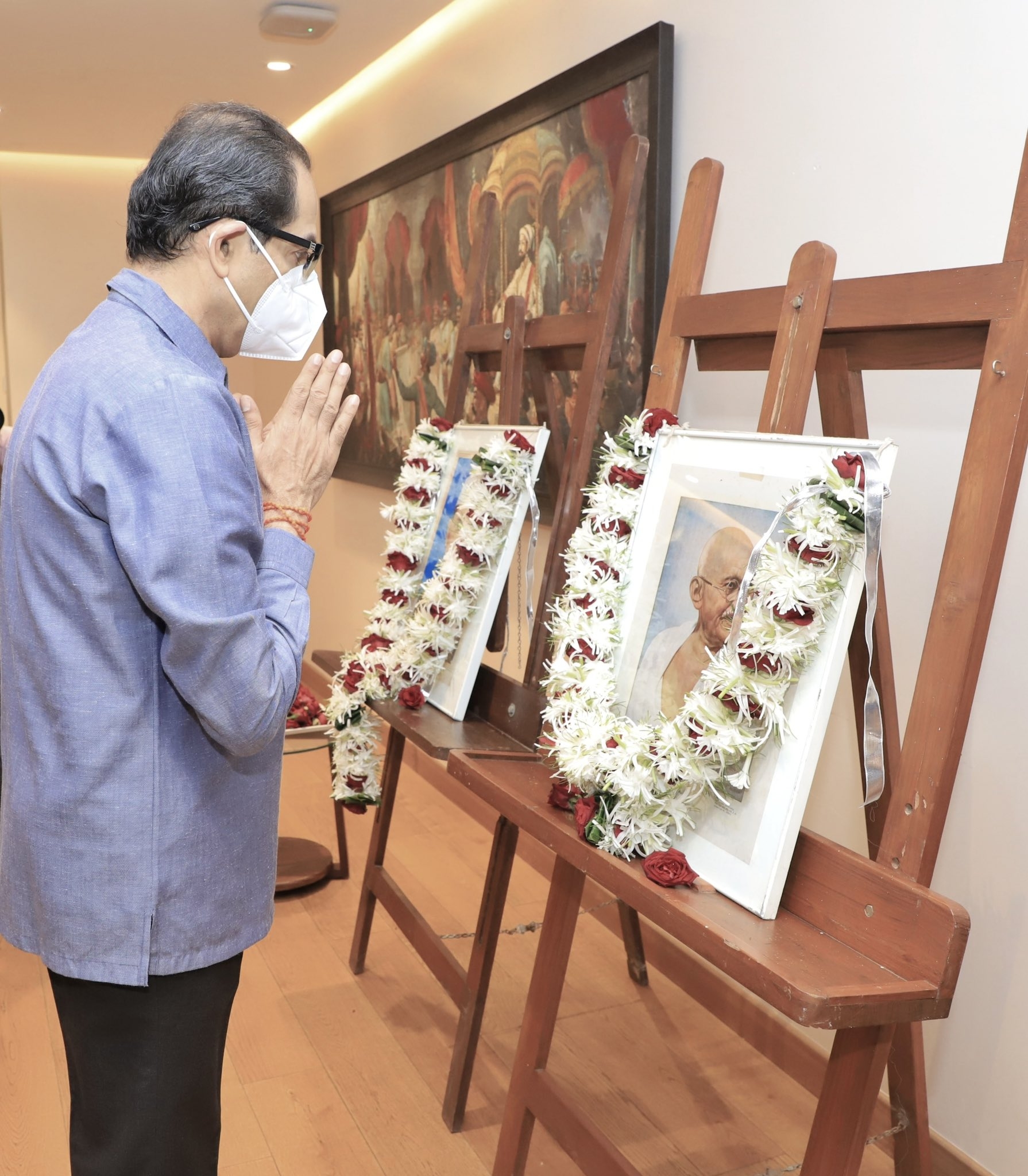 "My respectful tributes to the father of the nation, Mahatma Gandhi Ji on his birth anniversary today. Universally revered as an apostle of peace and non-violence Gandhiji was an embodiment of selfless service, kindness and compassion," tweeted Vice President of India. 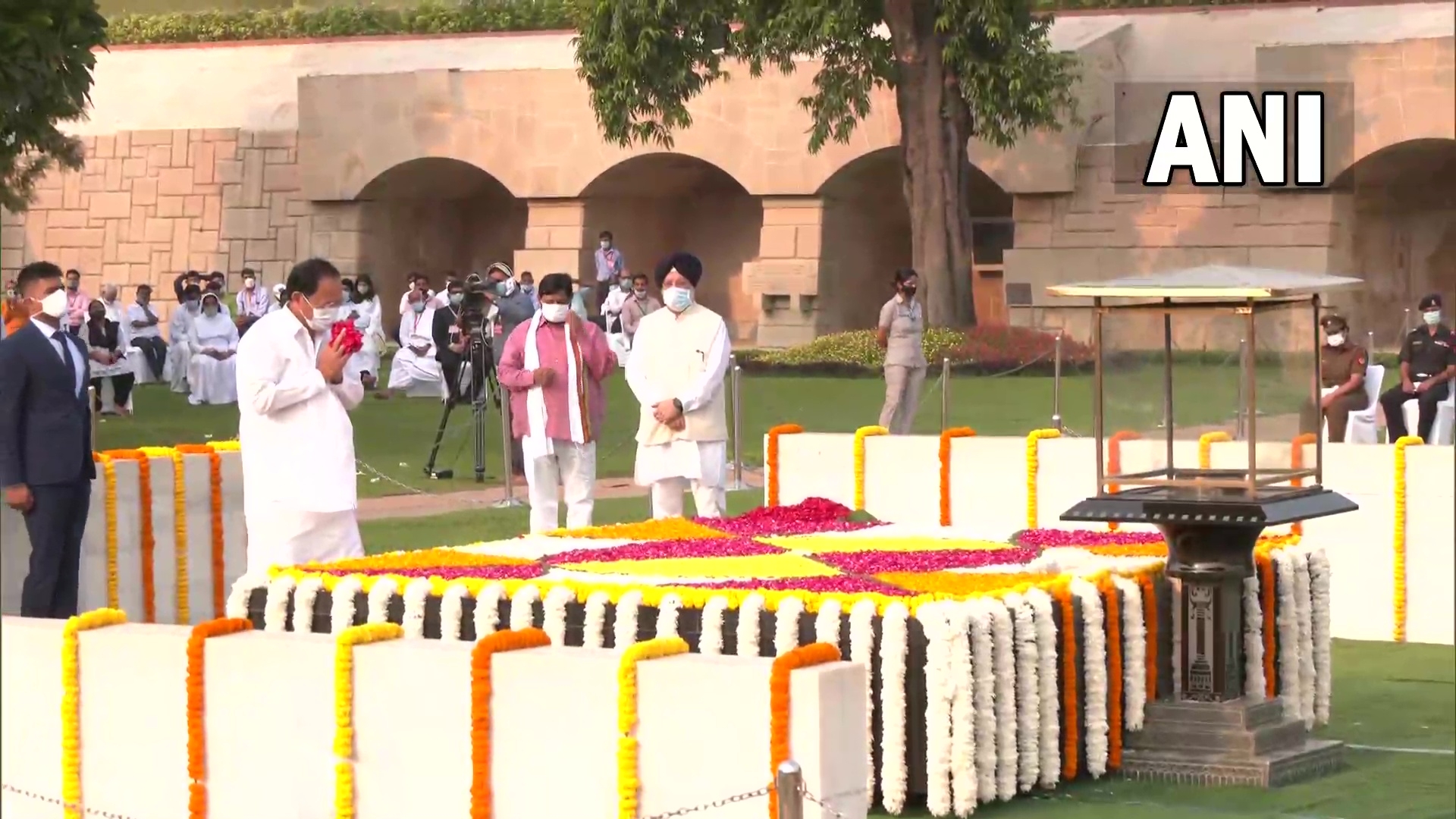 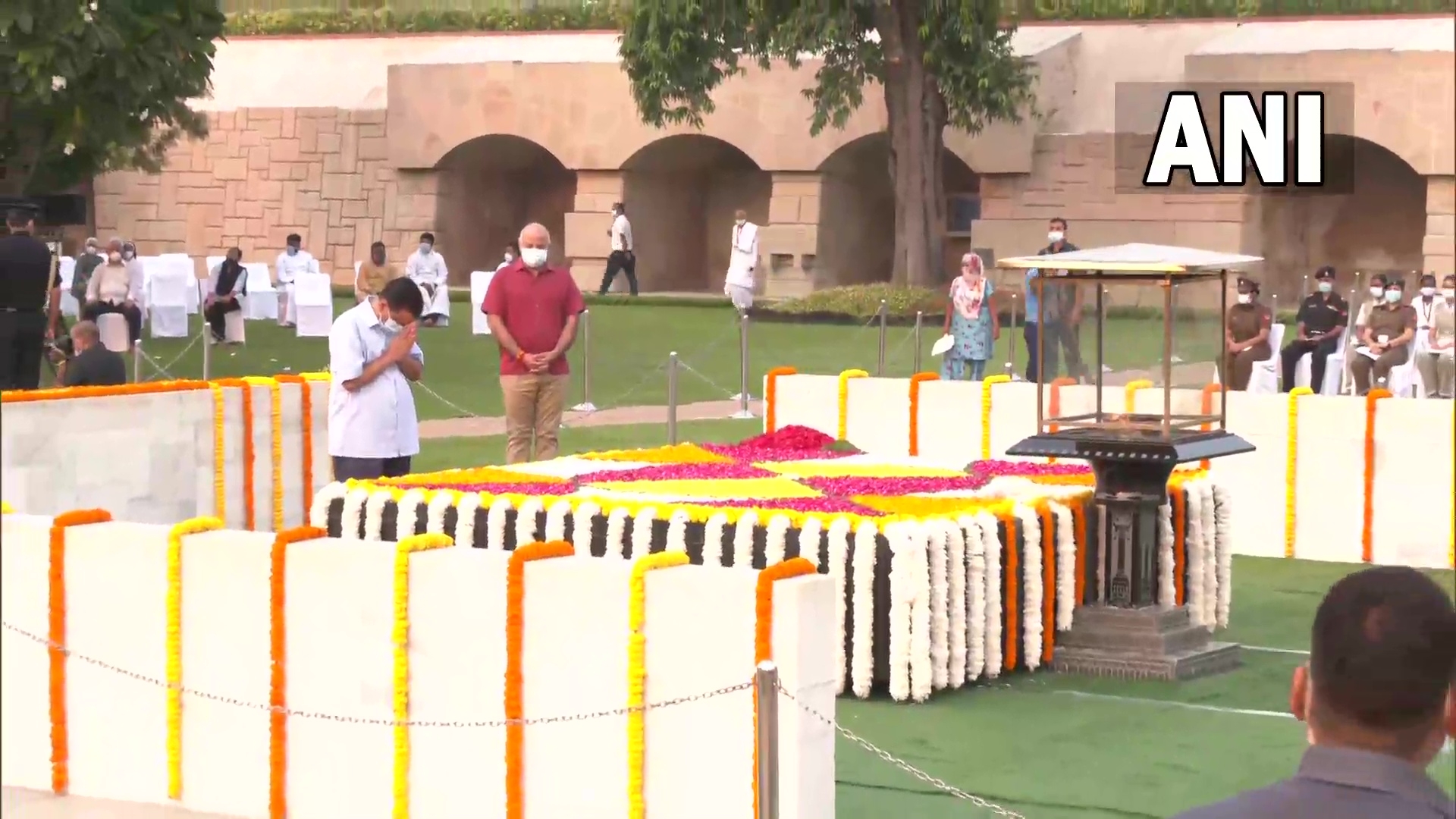 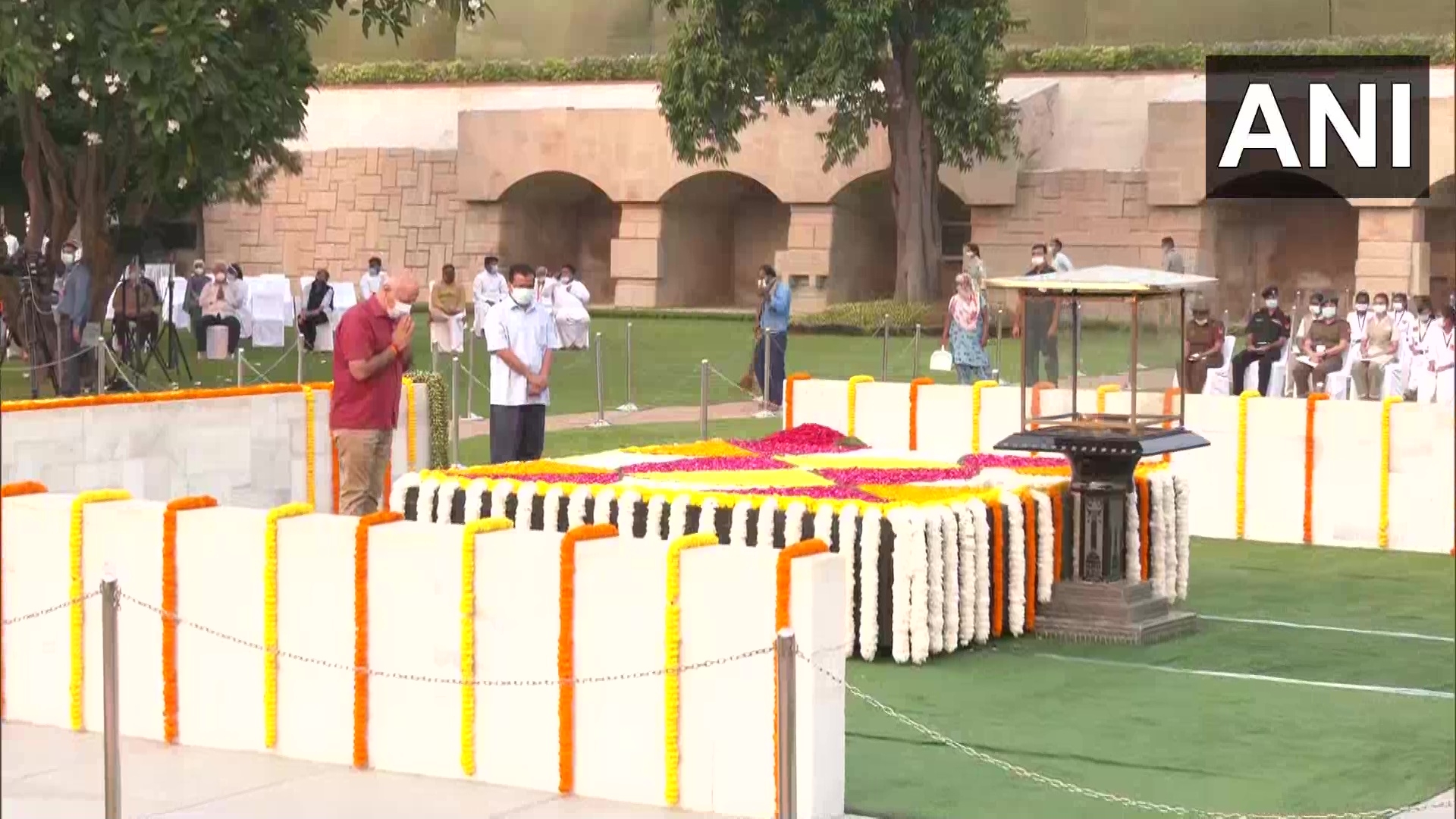 In a tweet in Hindi, Rahul Gandhi paid tributes to Mahatma Gandhi and posted the quote, "Vijay ke liye kewal ek satyagrahi hi kaafi hai (Only one 'satyagrahi' is enough for victory)", in a swipe at the government over the farmers' protest.

He also used the hashtag farmers protest and posted a video collage with glimpses from the farmers' protest and Mahatma Gandhi's satyagraha for independence. 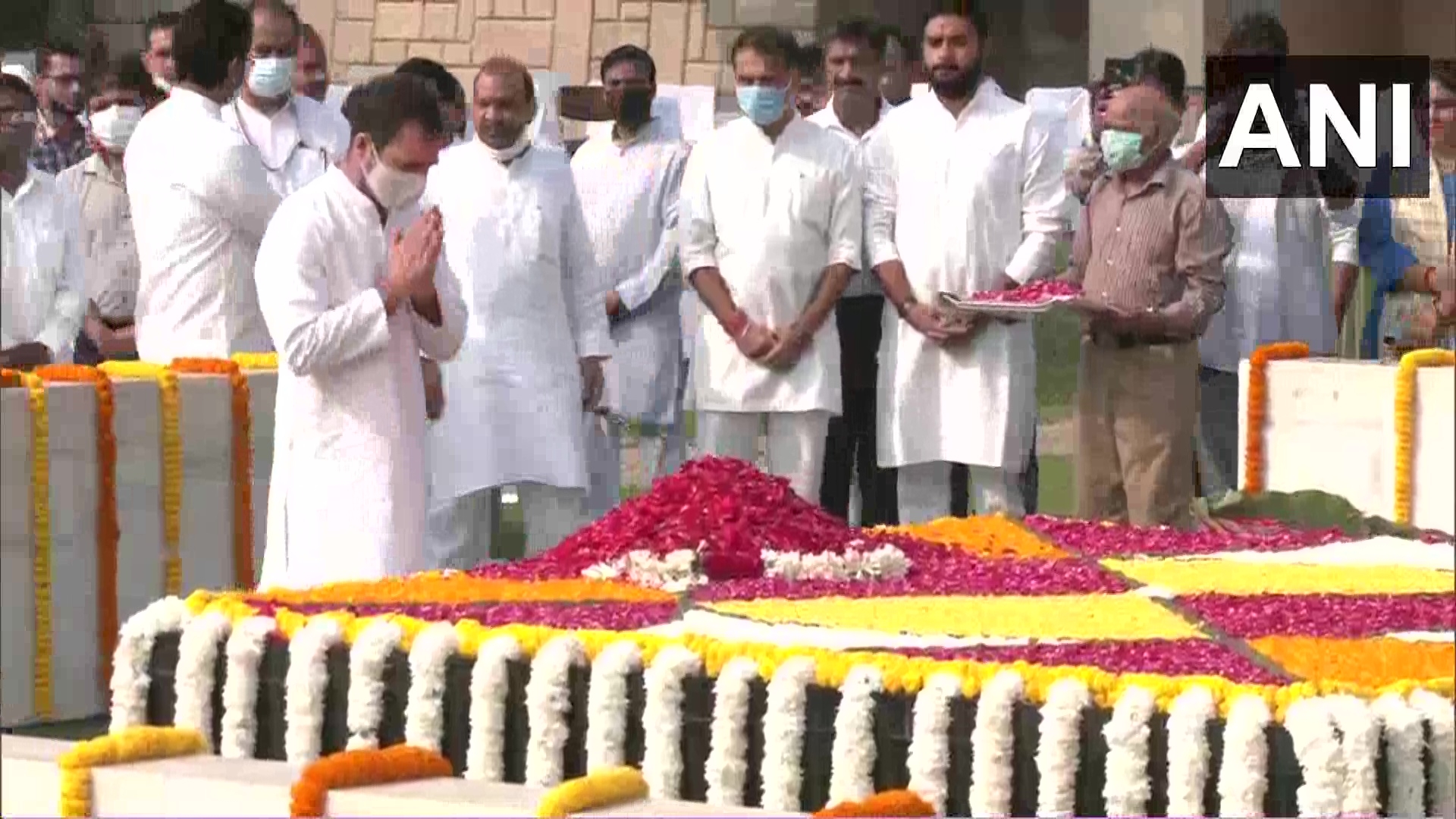 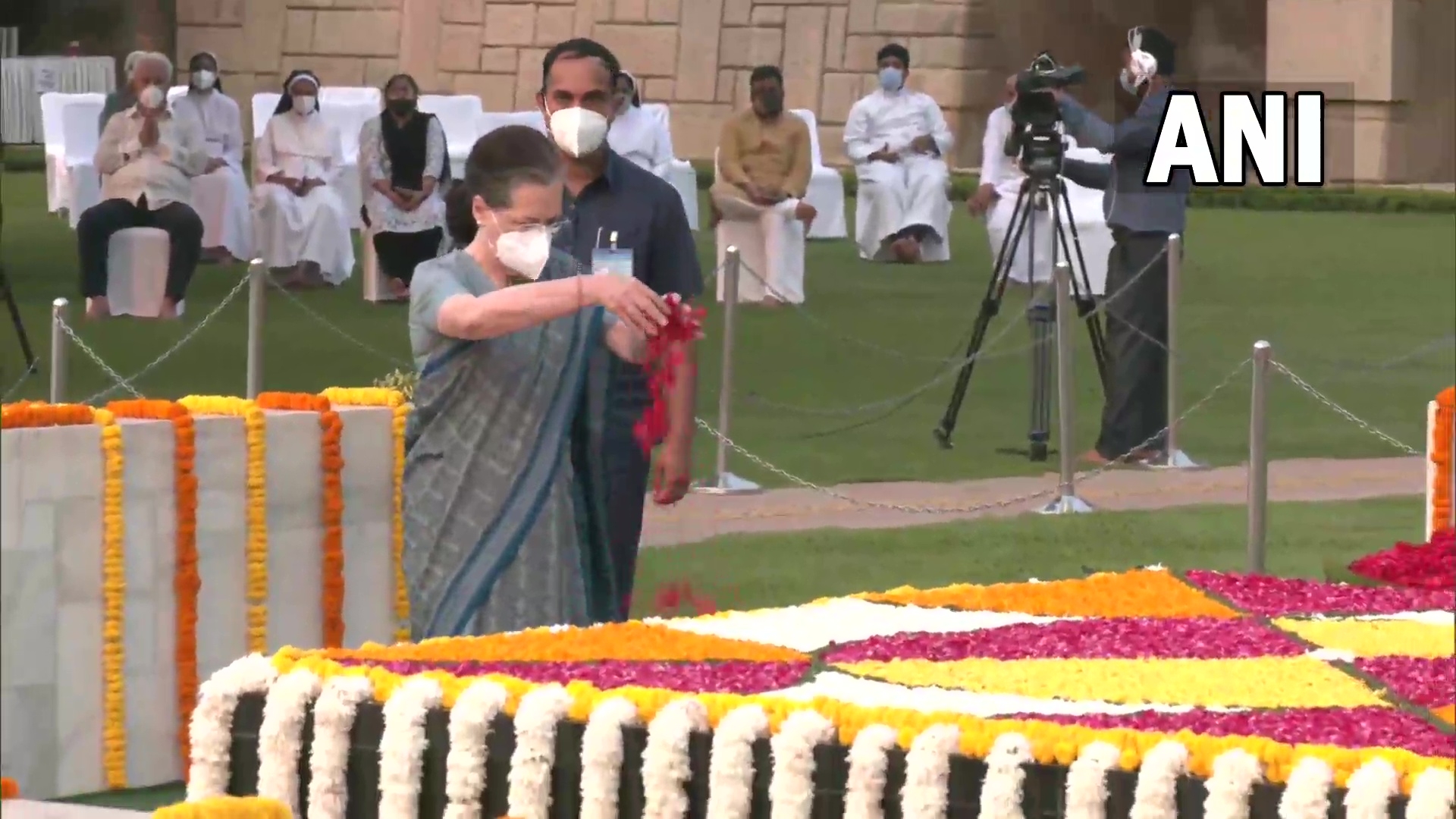 Rajasthan Chief Minister Ashok Gehlot paid tribute to Mahatma Gandhi by offering flowers to the statue in Jaipur on the occasion of Gandhi Jayanti. 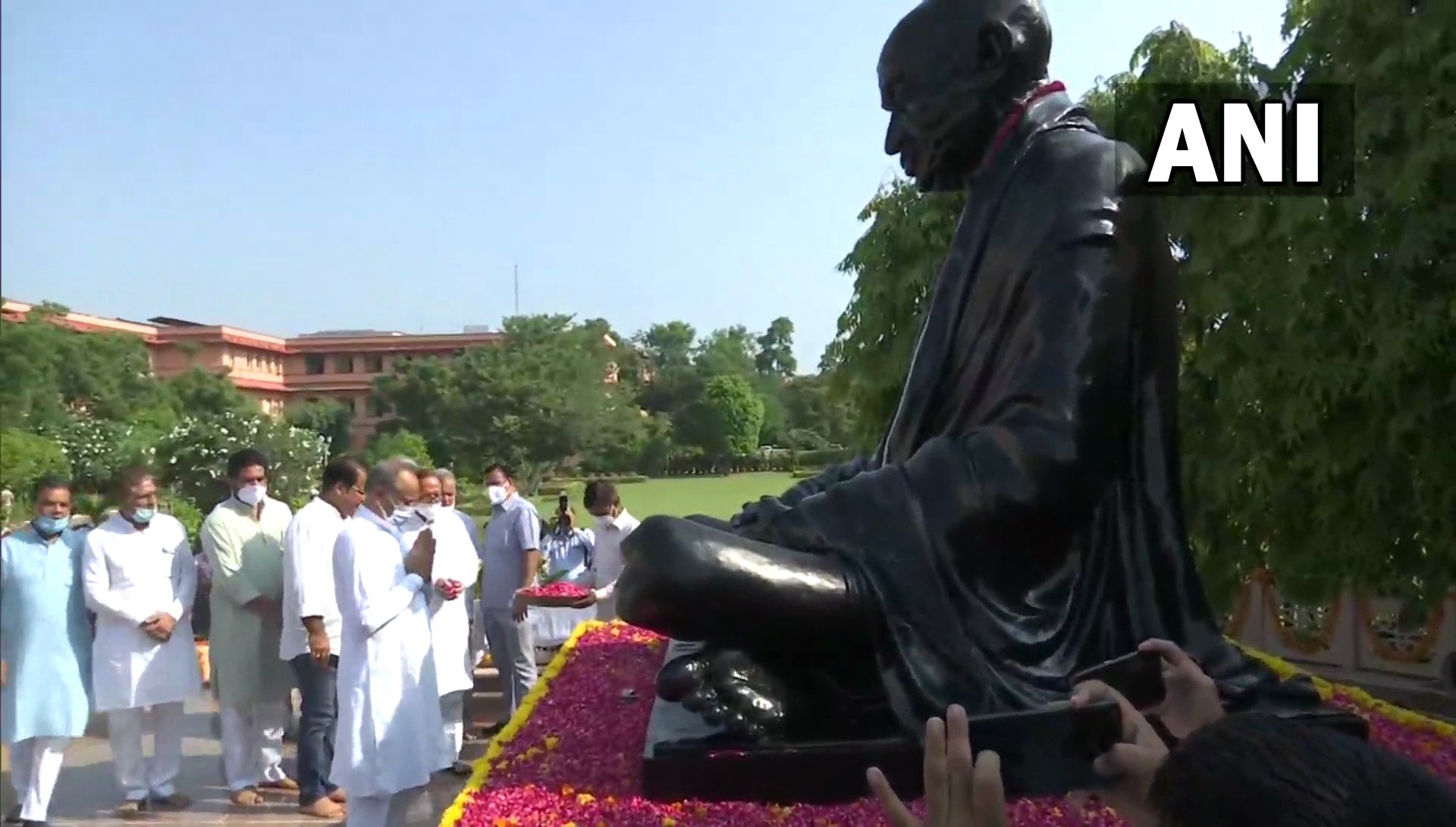 Speaking on the occasion, Goyal said, "Mahatma Gandhi was instrumental in getting us freedom, he is the father of the nation, a role model for every Indian, but one must also acknowledge his deep philosophical, spiritual and emotional connect both with the people of India and the world." 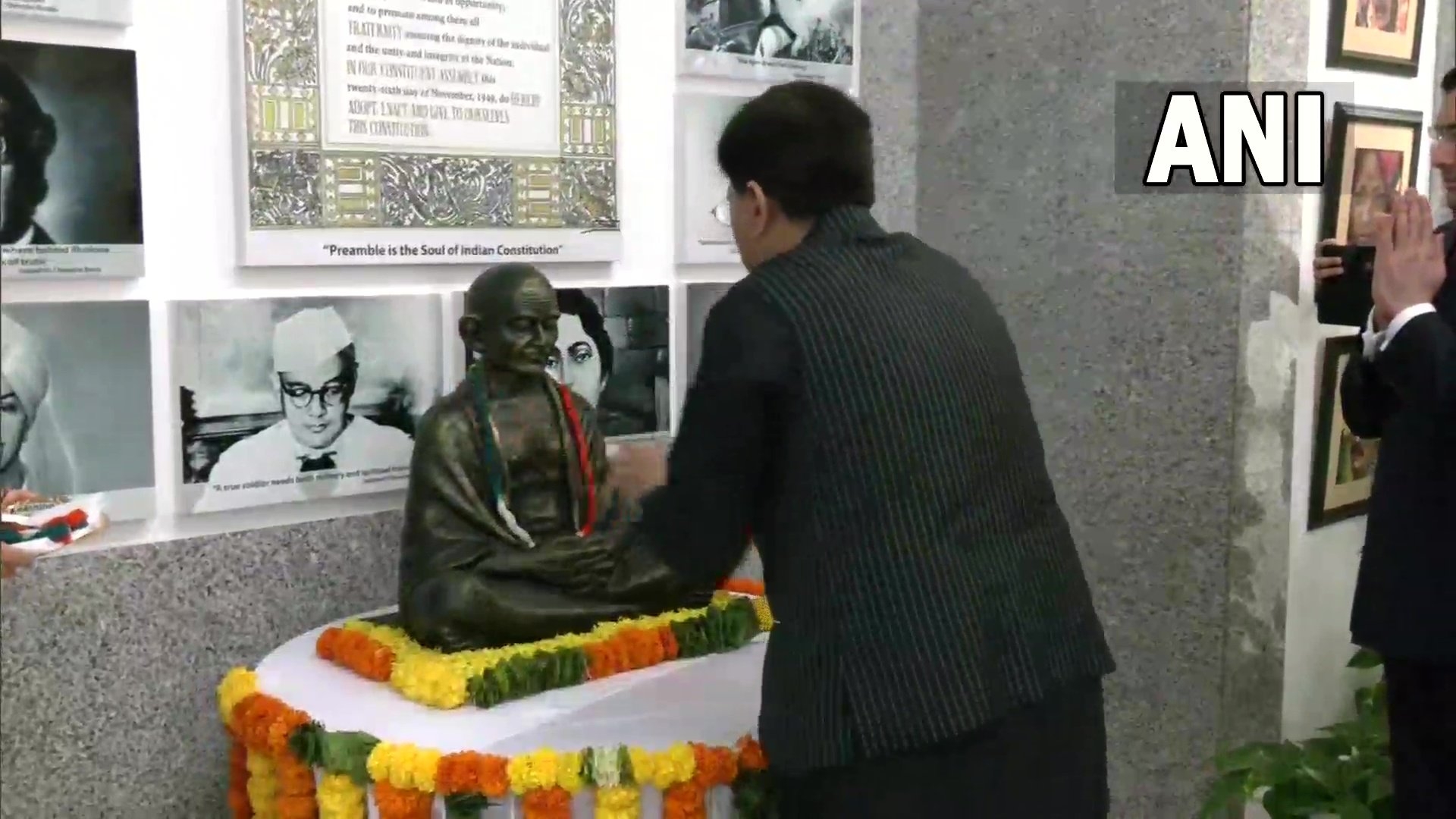 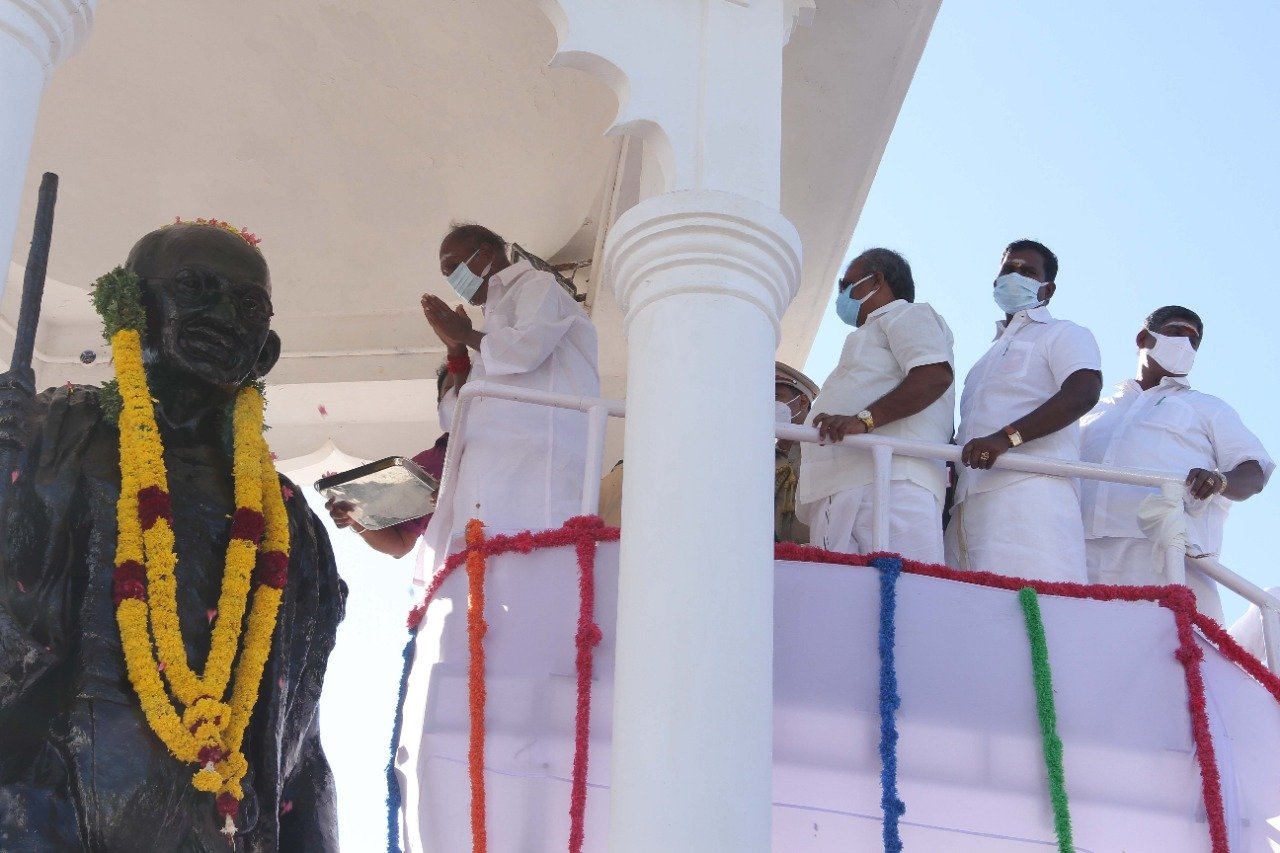 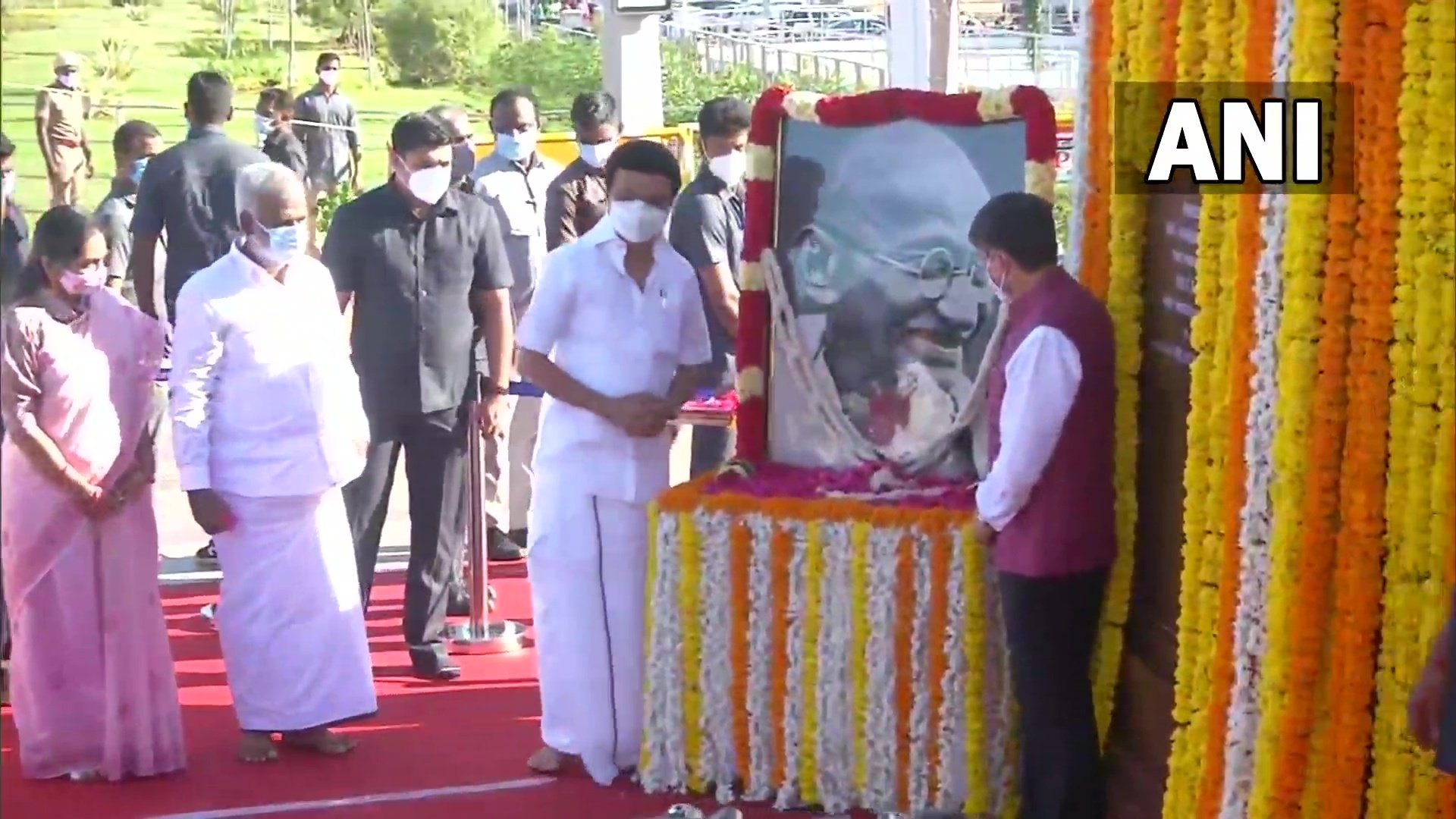 "On International Day of Non-Violence, we want to commemorate Mahatma Gandhi's life and his values of democracy and respect for the dignity of everyone in the entire world. He was the person who made India move forward as a united nation," she said on the occasion. 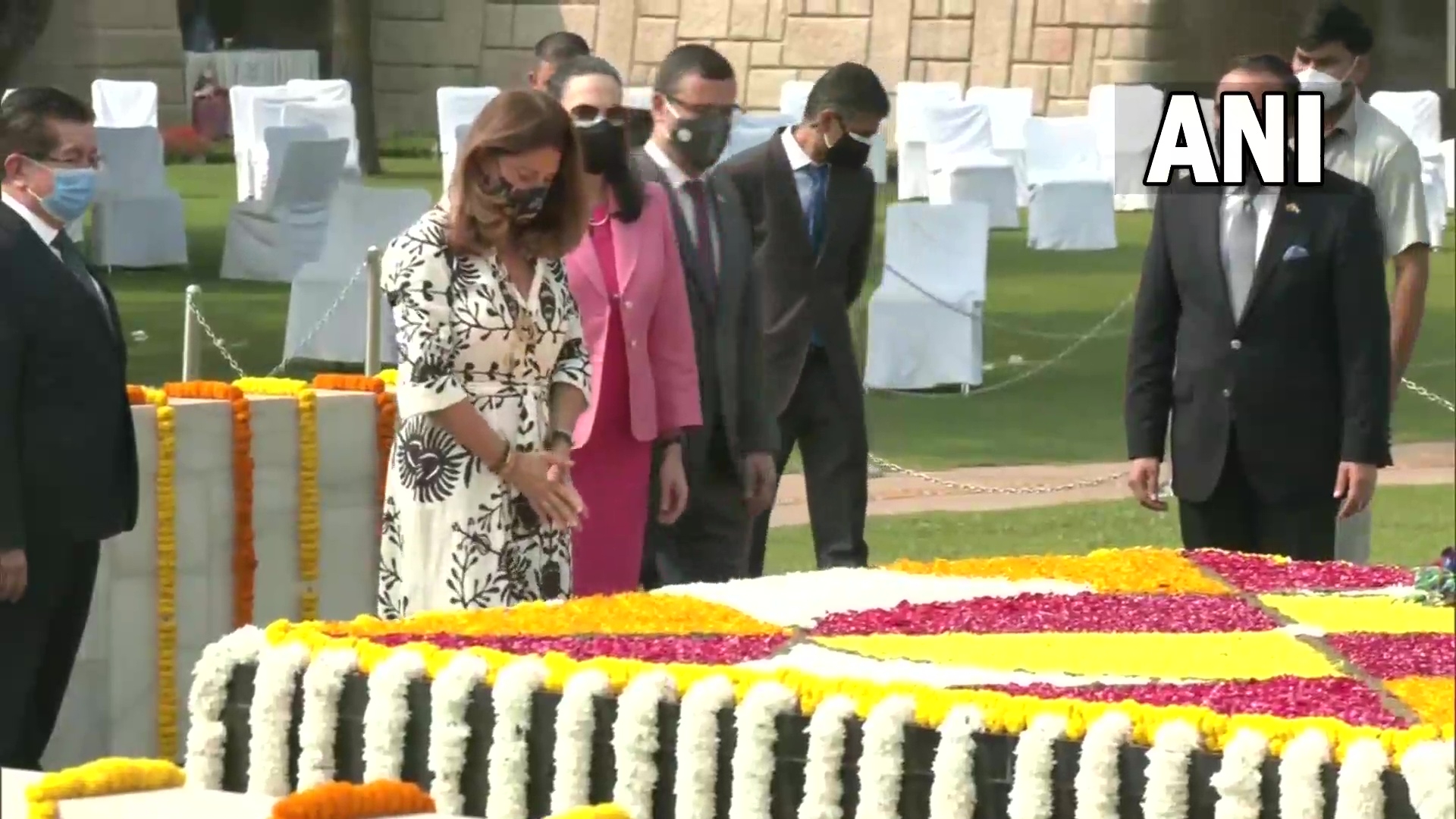 Born on October 2, 1869, in Porbandar town of Gujarat, Mahatma Gandhi or Mohandas Karamchand Gandhi adopted a non-violent resistance and was at the forefront of the freedom struggle against the colonial British rule.

This led to India finally achieving its independence in 1947. Fondly known as Bapu, his unwavering belief in 'Swaraj' (self-governance) and 'Ahimsa' (non-violence) won him accolades across the world.

Globally, Gandhi's birth anniversary is celebrated as the International Day of Non-Violence. Several events are held in India and across the world to mark the occasion. 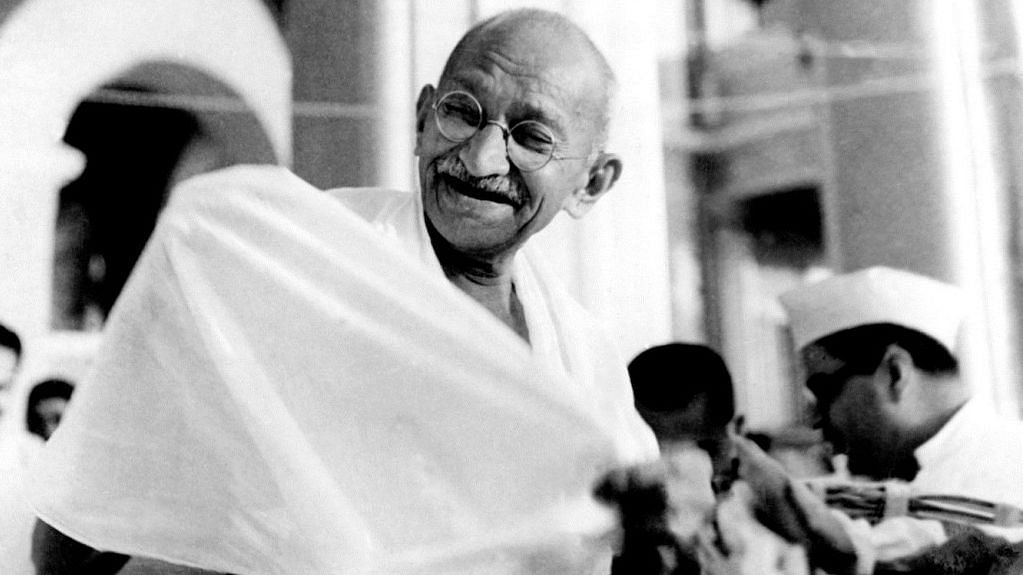