With just half as many seats as BJP, Shiv Sena set to drive a hard bargain

If it sets aside alliance compulsions, dream of its own CM tantalisingly within reach
Pramod Chunchuwar 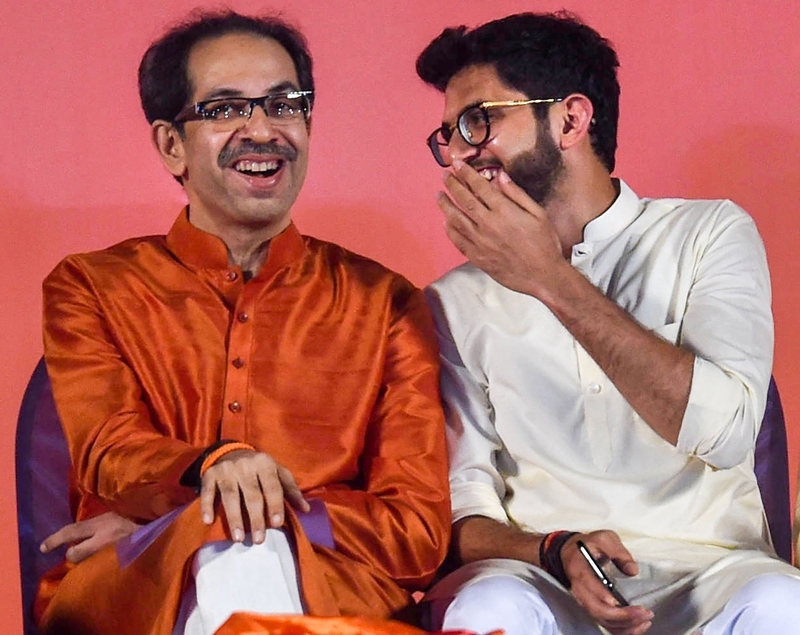 Mumbai: The assembly poll results in Maharashtra have now thrown up the prospects of various political permutations and combinations. In the immediate scenario, controversies have begun to fly, just as the Shiv Sena and the Bharatiya Janata Party (BJP) have claimed they will form the alliance government. The Sena is demanding a greater share of the electoral spoils.

At a press conference in the city on Thursday, Sena chief Uddhav Thackeray declared that the party was keeping all options open, a sentiment which should serve as a shocker for the BJP.

Even though the BJP has emerged as the single largest party in the state, it is not in the same commanding position as before. It may have to cede more ground to ally Sena, having fallen short of the majority mark of 145 seats. The BJP is on its way to winning 105 seats, while the Sena is likely to bag 56 seats.

The Sena is negotiating for a 50:50 power-sharing formula, which it claims, was a pre-poll understanding. This also means Sena will have its own chief minister for two-and-a-half years, like the BJP.

As per the election trends till the time going to press, the BJP looked set to win 105 seats, while the Sena was expected to win 56 seats. Clearly, the allies can easily form the government. However, Jayant Patil, the state Nationalist Congress Party chief, has bunged a spanner into the works by saying, in politics, there are no untouchables and the Congress-NCP alliance could form a government with the Sena. But the NCP chief Sharad Pawar has rejected this possibility.

These talks obviously seemed to have miffed Chief Minister Devendra Fadnavis, who has slammed all such speculation about the Sena forming the government with the help of the NCP-Congress and has claimed that the saffron alliance is intact. "Only the grand alliance of the BJP-Sena will form the new government. I have talked to Uddhav Thackeray and we have already decided what to do," said Fadnavis, replying to a question.

In the current scenario, the BJP will have to bend before the Sena, a throwback to their rule in 1995-1999, when the Sena founder, Bal Thackeray ensured his party had the upper hand. It was only in 2014, that the BJP got its own CM for the first time, after winning 123 seats and kept the Sena away from the government for a month. Only after the Sena bent before the BJP, seeking a share in power did it relent. But the Sena was not satisfied with the portfolios and the cabinet berths it was allocated. It was only the fear of a vertical split in the Sena led by Eknath Shinde that had sent it scurrying to join the Fadnavis government taking whatever it got. However, it ensured that its displeasure was evident to the public by constantly attacking Modi and the Fadnavis government. Now, it can savour sweet revenge.

Sena will extract its pound of flesh

The Sena had been hinting about extracting its pound of flesh even before counting day. The numbers game has now given them this chance. As the BJP now needs its support to form the government, it will have to give the Sena more space. When asked which party would get the chief minister's post, Sena chief Uddhav Thackeray said, "It is time to remind the BJP about the formula arrived at when BJP chief Amit Shah visited my home. We had decided on a 50:50 formula."

While campaigning for Aaditya Thackeray, Sena MP and spokesperson Sanjay Raut had already made it clear that Aaditya would be on the sixth floor of Mantralaya, occupied by the CM and his deputy. Varun Sardesai, Aaditya's cousin had tweeted that Amit Shah had promised the CM post to the Sena for 2.5 years. The Sena is now likely to pressure the government to do so and also demand a 50 per cent share in the cabinet. It will be interesting to see to how the BJP handles these demands.

Can form govt with NCP & Congress

If the BJP rejects its demands, the Sena can always exercise the option of going with the Congress and the NCP. In this case, the NCP may join the government and the Congress will provide outside support to the coalition. These three parties can easily cross the halfway mark of 144, as the Congress and the NCP have crossed the 100-seat mark. This combination will instantly help the Shiv Sena get the CM post for five years, a dream of its party founder Bal Thackeray. In such a scenario, defectors from the Congress and the NCP, who have bitten the dust in this election, may do a ghar-wapsi. As for those who won, they can always cosy up with their original party leaders.

BJP has options too

Anticipating that the Sena will drive a hard bargain, the BJP has already started to rope in rebels and smaller parties into their alliance. Fadnavis has already approached 15 legislators, including 11 Independents and winners from smaller parties. If these 11 Independents, mostly BJP and Sena rebels, join the BJP, its tally will reach 120 and this will give them leverage over the Sena. "The Shiv Sena has won just over half the number of seats as the BJP. But they are demanding an equal share of the pie. How can they do so, when their strength is half of ours?'' asked a senior BJP leader.