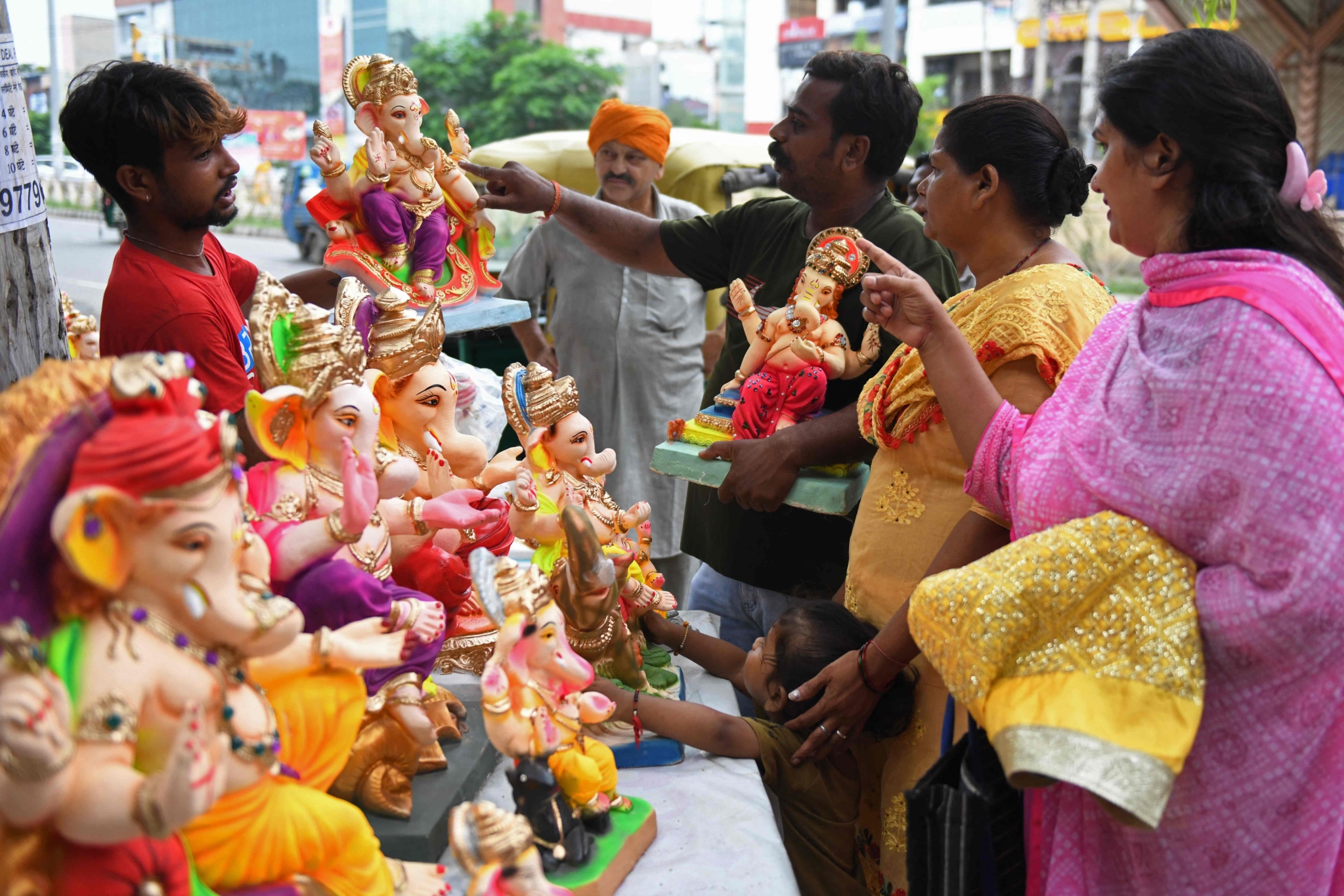 Devotees welcomed Lord Ganesh in their homes and public pandals on Friday as the 10-day festival dedicated to the elephant-headed God began in Mumbai and other parts of Maharashtra with focus on online 'darshan' amid the coronavirus pandemic and looming threat of a third wave.

For the second straight year, the pandemic cast a long shadow on festivities with the Maharashtra government placing a slew of restrictions to avoid gathering and processions.

The Maharashtra government has banned physical 'darshan' of Lord Ganesh at community pandals (marquees) and said only online 'darshan' or telecast from pandals would be allowed.

Citing the COVID-19 situation, the Mumbai police have imposed orders under CrPC section 144 prohibiting assembly of five or more persons during the Ganesh festival between September 10 to 19.

No processions of any kind would be allowed in Mumbai during this period and devotees would not be allowed to visit Ganesh pandals either, an official statement said on Thursday.

People can have `darshan' of Ganesh idols installed in pandals through the online mode or through other electronic media (such as TV), it said.

The Maharashtra home department has issued a circular banning visits to pandals so as to prevent the spread of the viral infection.

Also, the height Lord Ganesh idols to be installed has been restricted.

In Mumbai, there are around 12,000 sarvajanik (community) mandals and nearly two lakh homes where idols of the deity are installed.

The usual pomp was missing since processions have been banned. Lord Ganesh made a quiet entry into the homes of his devotees.

Naresh Dahibavkar, president, Brihanmumbai Sarvajanik Ganeshotsav Samanvay Samiti, told PTI that compared to last year, when 90 per cent of the mandals had celebrated the festival in view of the coronavirus outbreak, this year all of them are installing idols of the deity.

The samiti is an umbrella body of Ganesh mandals that coordinates the festival between the BMC and government agencies.

"The festival will be celebrated with usual fervour and gaiety unlike last year as the COVID-19 vaccination drive is going on and there is awareness among people about the pandemic," Dahibavkar said.

"In view of the third wave threat, all government protocols for COVID-19- appropriate behaviour are being observed," he said.

"This has been done at the last minute. The stake-holders were not consulted. Physical darshan was banned last year too. We will suffer heavy losses since there will be no devotees to see the banners and posters of our sponsors," he said.

Livelihood of people associated with the festival, which generates a turnover of Rs 70 crore to Rs 100 crore (in Mumbai), will continue to be impacted due to the pandemic, Dahibavkar said.

He said Ganesh mandals have contributed to the state government's efforts to provide relief to people in flood-affected Konkan region and have also been doing social activities.

"The government should have considered our problems too," he said, adding, "The mandals have contributed Rs 40 lakh towards flood relief," he said.

The state government has issued an order to ban physical darshan at mandals and said not more than ten people (who have to be fully vaccinated) would be allowed to bring the idol which should not be more than 4 feet in height (at marquees).

Home idols should not be more than two feet in height and only 5 people (fully vaccinated) will be allowed to accompany the idol.

The administration has put restrictions during immersion of idols as well.

In the last two days, markets were overcrowded with people making purchases to welcome the elephant-headed God, raising concerns about the lack of physical distancing.

The GSB Sewa Mandal, which installs the idol for five days at Kings Circle in Mumbai, said this year's celebrations will be simple.

It said during the last one year, the mandal has distributed food to relatives of patients in government hospitals and was in the forefront of relief and rehabilitation efforts during Konkan floods in July.

"We will celebrate the festival religiously like every year but without any devotee visiting the pandal as per government guidelines," the GSB Sewa Mandal said in a statement.

Live darshan will be on the mandal's social media platform, it said.

The festival of Ganesh Chaturthi, also known as Vinayaka Chaturthi, marks the birth of the elephant-headed God. It is celebrated in the month of Bhadrapada (August-September).

Lord Ganesh is considered an embodiment of wisdom and widely revered as the remover of obstacles.