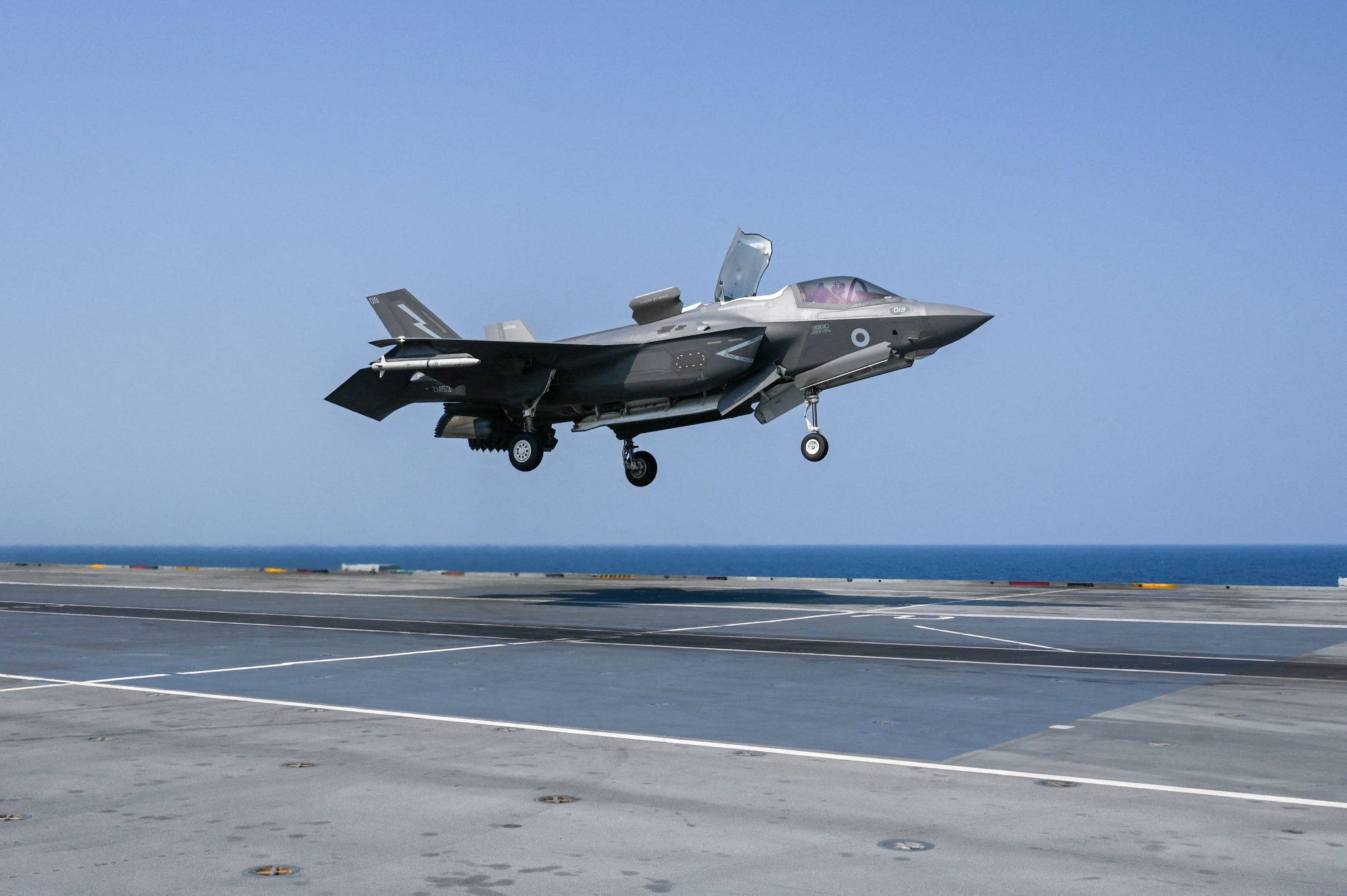 A F-35B fighter jet prepares to land on the flight deck of UK Carrier Strike Group?s HMS Queen Elizabeth in the Arabian Sea, off Mumbai coast on October 21, 2021. | AFP

An F-35B fifth-generation fighter aircraft made a vertical landing on the British Royal Navy aircraft carrier HMS Queen Elizabeth in the Arabian Sea near Mumbai.

According to reports from ANI, the Warship is in India for a joint exercise with Indian forces.

Terming the ongoing joint exercises between the Indian and British forces in India as important for enhancing interoperability between all the forces of the two countries, a top British naval officer said the aim of the drills is to thicken the relationship between them.

"In defence, the exercises are important for thickening the relationship between our navies, air forces and armies. On this particular aspect, we are going to get this in this exercise. We are all exercising together at the same time to get all our communications going between all parties in the exercise," Royal Navy's HMS Queen Elizabeth Carrier Strike Group commander Commodore Steve Moorehouse told ANI in an interview.

A number of high-level visits and exercises between the army, navy and air force of the two countries is taking place at the moment as the British CDS, Army and Navy chiefs are in the national capital while the British forces are exercising with Indian forces at different places. The exercise Konkan Shakti is the maiden tri-services exercise between India and the UK.

Moorehouse said the ongoing exercises between the Su-30MKIs of the Indian Air Force and British and American Marine Corps F-35s were going on well and both sides were gaining a lot from each other and operating jointly.

The American Marine Corps F-35s are permanent part of the British carrier strike group and operate with them.

"I think any opportunity to work with friends and allies makes the region safer and raises the potential for more prosperity on the open seas," Doran said when asked if the participation of Indian, American and British forces was going to help their cooperation in working or operating jointly in the region.

Asked about the experience of British Navy carrier in the South China Sea, Moorehouse said the "first thing that I have been telling media in UK is that it is a huge piece of water and air space and it is very similar to the Mediterranean. We were exercising there and the Chinese were exercising there. Our engagement with the Chinese navy and Air Force was very safe and entirely professional." However, he said the claims there (South China Sea) need to be sorted out diplomatically with people sitting around the table. Navies bumping up against one another won't be the answer.

Asked about the deployment of the carrier strike group in the region in view of the announcement of creation of AUKUS grouping by Australia, US and the UK, the Royal Navy officer said, "AUKUS is similar to our relationship with India with so many strands like security, sharing of technology...

"It is like like-minded guys coming together. AUKUS is just another example of that. It's a good thing to do but it does not mean that it takes precedence over other organisations and alliances that we are in," he said.