Less than a week after they stole a vehicle from Vasai, sleuths of the Valiv police arrested a duo from Nashik for their involvement in the crime. The accused are believed to be members of an inter-district gang who are involved in a spate of vehicle thefts in and around the region.

According to the police, they received a complaint in context to theft of a Mahindra Bolero pick-up van from the Valiv Phata area of Vasai on 5, December. With virtually no clue in their hand, the investigating team tried to track the movement of the stolen vehicle on the virtue of intensified surveillance at toll collection booths on the suspected getaway routes.

Armed with information that a large number of stolen vehicles-especially pick-up vans and jeeps are taken to Dhule to be sold in scrap, the police team trained their concentration on this route. 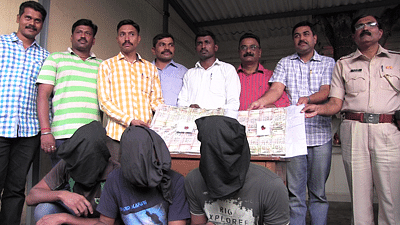 Based on technical surveillance, the investigators managed to ascertain the movement of the vehicle and with the help of their counterparts in the Nashik (rural) police apprehended the duo who have been identified as-Pranay Deepak Borse alias Nishant (19) and Aavesh Rahim Shaikh (27)- both residents of Dhule.

The duo have confessed to the crime, said the police officials who have also recovered two vehicles including the Bolero and a Maruti Swift Dezire worth Rs. 6.63 lakh from their possession. A case under section 379 of the IPC has been registered against the accused.

The police have not ruled out more arrests and the duo’s involvement in similar crimes with the help of their accomplices who reportedly sold off the stolen vehicles in Dhule district where they are scrapped within hours of arrival. Further investigations were underway.