The elderly couple was detained by the GRP in Dombivli after a photo of them went viral on social media with a claim that they might be child abductors. The police upon probe found they were her grandparents.

Thane: A viral picture of an elederly woman and a child kept the police on their toes on September 23. Reportedly, the photo was circulated by many claiming that the woman had kidnapped the child and was using for begging. The matters worsened when MLA Raju Patil shared the photo.

According to a report in Hindustan Times, a member of Tejaswini Mahila Pravasi Sanghatana (women railway passenger association) had spotted the child on Dombivli in an supposedly unconscious state while her grandparents were begging. It was her who reported it to the police and put out picture on social media which went viral.

The Railway Protection Force were sent into overdrive by the legislator to find the woman and the child, reported Midday.

The reports stated that once the police got hold of them, they were handed over to Dombivli Government Railway Police (GRP). During the probe they figured that the elderly woman identified as Nashika Kale was the girl's (7) grandmother.

The reports stated that the police called Kale's daughter, resident of Beed, who told the police that she had twins and did not make enough to provide for both the children and hence sent one of her daughters to her grandparents in Ahemdnagar.

Read Also
Mumbai: Women remove clothes to escape locals who mistook them for child-lifters in Malvani 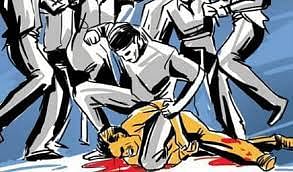 The HT report quoted police officials saying that the mother told them that she was unaware of the begging activity. The report further stated that the Nashika and her husband Nilya Kale came to Dombivli and other areas often from Ahmednagar to beg.

Mukesh Dhage, in charge of Dombivli GRP, told Midday that the girl was sent to a children's home at Ulhasnagar and will be produced before Child Welfare Committee.

Meanwhile, her grandparents have been booked and police is probing the matter.