HomeMumbaiTeen among two held for robbing, assaulting a woman in broad daylight

Teen among two held for robbing, assaulting a woman in broad daylight

Mumbai: Samta Nagar Police in Kandivali (E) have arrested a man and sent a minor teen to a correctional home for allegedly robbing a woman of her mobile phone.

According to police sources, the incident occurred on February 19 at around 3.30 pm, when the complainant, a 35-year-old woman, was walking on Dattani Park Road near Samta Nagar in Kandivali (E). The youth riding pillion on the scooter tried to snatch the complainant's mobile phone, but she resisted and did not let go of her phone.

The youth then pushed the woman and assaulted her by kicking and punching her guts, following which he snatched the phone and fled. The woman then lodged a complaint against the unidentified persons. Considering the intensity of the The police immediately formed teams for the investigation.

Since the area where the incident occurred was not covered by the CCTV cameras, police scrutinised over 20-25 CCTV camera footages to identify the accused. Based on technical investigation, police identified the accused as residents of Rajendra Nagar in Borivali (E), following which a trap was laid to nab them. The duo was apprehended from a pan stall in Rajendra Nagar, of which one was a 17-year-old minor, while the main accused was identified as Sonu Kumar, 19. Police said that the minor was sent to a correctional home after detention, while his accomplice was booked under relevant sections of the IPC for robbery (section 394) and common intention (section 34). During the probe, police seized their scooter, MH-47-U-0304, and other valuable collectively valued at ₹73,000. The duo has similar crimes registered against them at Kasturba Marg, said police. 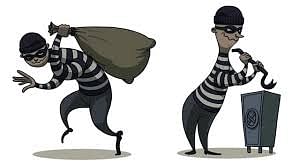