Suspected Covid patient died for lack of ambulance to get her to hospital: Kin

“The ground situation is really very grim. The poor are the worst sufferers as they are not getting beds or ambulances on time”
Sweety Adimulam 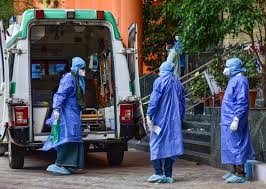 Mumbai: The family of a 56-year-old woman from the adivasi community in Mumbai's Sahar village has claimed she died for lack of an ambulance at the R N Cooper Municipal General Hospital which could have rushed to her house and enabled her to get timely medical treatment. The deceased woman is suspected to have died of Covid-19.

The younger brother of the deceased told The Free Press Journal, "I called the Vile Parle police station's landline for ambulance service. They called the Cooper Municipal General Hospital to send an ambulance but were told that no ambulance was available to transport the patient. When I called, I was also told the same thing. For want of timely ambulance facility, my sister died in the house before she could receive any medical treatment."

He said, "My sister worked as a housemaid, but after the lockdown was imposed, she lost her means of livelihood. She was suffering from fever and cough for the last one month. Since we had no money, we could not go to a private hospital for treatment. The nearby clinics prescribed some medicines but it did not help her much. Cooper Hospital also denied her treatnent and eventually, she lost her life."

However, the dean of Cooper Hospital, Dr Pinakin Gujjar said, "We do not refuse patients, but if we do not have beds, we tell them so. However, I don't know about the matter so I will have to inquire with the medical ward. Also, ideally, I cannot admit any patient directly, they have to be referred by 1916 (disaster control helpline number). When seriously ill patients come, we admit them but only if we have beds."

Activist Godfrey Pimenta, who is a resident of Sahar Village said, "The ground situation is really very grim. The poor are the worst sufferers as they are not getting beds or ambulances on time." He suggested that BMC should develop a dedicated app to track ambulances ferrying patients. He claimed, "The poor are dying for want of ambulances and I have seen several standing outside plush hotels and big private hospitals."