Saibaba’s brother G. Ramadevudu called the statement that family members are not ready to meet him as “completely false, baseless and fabricated”.
Bhavna Uchil 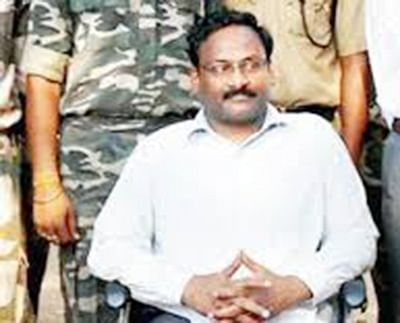 An “adverse” inquiry report from Malkajgiri police station in Hyderabad which was used by Nagpur prison superintendent to deny emergency parole to Prof GN Saibaba when his mother passed away on August 1 has been called “completely false and baseless” by his family.

The report by an inspector of Malkajgiri police station states that he had visited Saibaba’s home to inquire about the latter’s mother’s demise and found that no family members are ready to meet Saibaba nor give any assurance to produce before any authorities. Further it said that Saibaba’s wife and daughter reside in Delhi and the funeral of his mother was conducted the same day that she passed away and there was no necessity for Saibaba to visit Hyderabad on parole.

The Nagpur prison relied on this inquiry report while rejecting the emergency parole plea filed by Saibaba the next day of his mother’s demise. Stating that the report from the Malkajgiri police station was received on Aug 4 and is “adverse” the jail superintendent AM Kumre states the two reasons for rejecting Saibaba’s plea as - his mother’s funeral rites are completed and secondly that no family members are ready to meet him and no one is ready to give assurance to produce before any authorities. Further it said he is convicted of serious offence under the UAPA related to Naxal activities and has not been released even once on any leave, while rejecting his plea.

Saibaba’s brother G. Ramadevudu called the statement that family members are not ready to meet him as “completely false, baseless and fabricated”. He said two constables from the local police station had come to his home, noted his credentials and asked about Saibaba’s wife and daughter.

“They never asked me whether we are willing to meet him. We are ready to give whatever assurance they want. My brother cannot run away, he cannot move by himself, everyone knows,” he said.

Ramadevudu said the family wanted Saibaba to attend the funeral as he is the eldest son and it was their mother's last wish that he conduct her last rites. Their mother Suryavathi Gokarakonda, 74, died of cancer on August 1. Ramadevudu incidentally made a parole plea for Saibaba on Aug 4 - the same day that Saibaba’s emergency parole plea came to be rejected by jail authorities stating that the family are not ready to meet him. They were not aware of the plea filed by Saibaba then.

The plea by Ramadevudu addressed to the Divisional Commissioner, Nagpur says, “As Prof. G.N. Saibaba was denied seeing his mother in her last part of her life, at least he must be allowed to offer homage to his beloved mother in after-funeral proceedings scheduled at my place between Aug 28 and Aug 31. It is also submitted that the request to the prison authorities for a last minute video-call to Saibaba with his mother in her last moment was also denied by you.” The application states further that he confirms that the facts stated by him are true and is prepared for the action that may be taken against him if they prove to be false.

Prof GN Saibaba, a tribal and Dalit rights activist, who is 90 percent disabled and uses a wheelchair, is serving life imprisonment in Nagpur Central prison for Maoist links and waging war against the state under the Unlawful Activities (Prevention) Act (UAPA). He was convicted in 2017 by a Gadchiroli sessions court. On July 28, the Nagpur bench of the Bombay High Court rejected his interim bail plea in which he had expressed his desire to see his severely ill mother. She died only four days later.